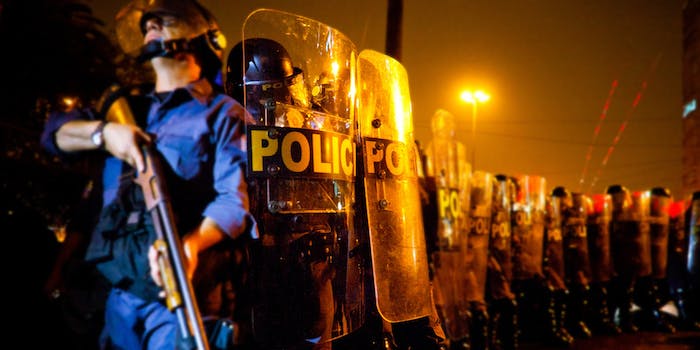 As Ferguson, Mo., enters the sixth night following the death of unarmed teen Michael Brown, social media is just about the only way to keep up with what’s happening on the ground. Major news networks have been widely criticized for their failure to provide live coverage of the events surrounding Brown’s death, but a number of other professional and citizen journalists have stepped up to fill the gap.

My face after tear gas. Stinging, eyes watering. I’m not getting out of this car. #ferguson #mikebrown pic.twitter.com/ALIVdhzlXa

As the local and Internet communities push for answers six days after his death, the name of the officer who killed 18-year-old Michael Brown remains unknown. Communities across the country are now rallying around the hashtag #NMOS14, organized by @FeministaJones, for local vigils, listed here (the Google Doc may not be up to date, so search Twitter for #NMOS14 and your city or state to find for more details on local events).

As Wednesday night demonstrated, Twitter is the best way to track what’s going on in Ferguson in real time, but two livestreams—Infowars and KARG Argus Radio—managed to stay up even as those filming fled plumes of tear gas, and will likely be back online Thursday night. For who to follow on Twitter, we’ve embedded a selection of hand-picked accounts.

We also suggest this list, compiled by Daily Dot contributor Dell Cameron. And for an even more in-depth look, try the Reddit livefeed for Ferguson news and scanner reports.

Spoke to the President earlier about the situation in #Ferguson. Working in #STL today to make progress pic.twitter.com/o9ATKUiwcL

#Ferguson Police Chief: “If anybody was arrested, from what I understand, it was because they were in an area being cleared by police.”

Side streets are deserted. A police car with flashers on just drove by. Helicopter buzzing overhead. #Ferguson

Found what seems to be an undetonated “mini bang” cracker on W Florissant pic.twitter.com/iWHq6TyK9y

Some photos from last night in #Ferguson that I didn’t get to post before I was arrested. pic.twitter.com/vhU8AgjUmF

Two photos from this evening’s encounter with the SWAT team. It…wasn’t pleasant. pic.twitter.com/TCVqtD1Gni

I was also never informed of my Miranda Rights.

Photo by cabralgabriel/Flickr (CC BY 2.0)