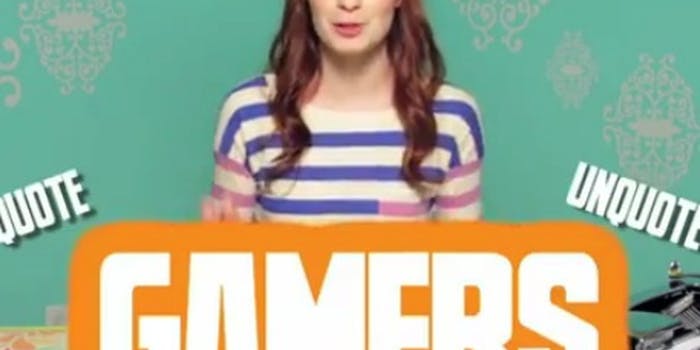 Addicted to Angry Birds? Felicia Day has your back.

Long ridiculed by the rest of the hardcore gaming community, casual gamers, including those that play Facebook games and Angry Birds, have been accused of “destroying the videogame industry” for years by hardcore gamers—people who buy every big blockbuster game and play daily or competitively.

Actress, writer, producer, and gamer Felicia Day is calling “bullshit” on that.

In her latest vlog on her newYouTube channel, Geek and Sundry, Felicia Day goes into a mini-rant (at the 2:14 mark) before talking about her favorite casual gaming site, Jay is Games.

“I’d like to take on this idea of casual games, and people not being real quote-on-quote ‘gamers.’ I think this kind of talk is bullshit. I don’t know where this magical checklist is that measures whether you can call yourself a gamer or not, but I think this attitude is elitist and prevents gaming from being more acceptable and mainstream. And, the more accepted gaming is, the less likely your boyfriend or girlfriend will complain about you raiding four hours a night. They may even join you!”

“I agree with her comment on casual gaming,” wrote allnamesaretakenful. “I’ve played video games since I was 5 and have gotten hardcore into﻿ a lot of games, but I might be called casual because I don’t play Call of Duty or because I like Mario games.”

“[T]he more we keep talking about casual games in a positive light and promoting their legitimate aesthetic value, the more the general news media will take notice, and, just like [Day] said, the more people will come to appreciate games as everyday works of art and culture the same way books and movies and music comprise what most people consider ‘entertainment.’”

Not surprisingly, hardcore gamers proceeded to argue their case with vitriol in the comments section of Day’s video.

YouTuber cartesiaLive maintained that “the more non-hardcore gamers dominate the market, the less hardcore﻿ games are developed,” which would ultimately lead to “nothing …but watered down casual arcade crap.”

LonerStoner basically argued the same thing, writing “casuals suck fucking dick,” and are “RUINING THE INDUSTRY” because they “ruin games like Halo and Gears of War with their complete lack of common gaming sense.”

Is Day aware of the hornets nest she kicked? Or was she being purposefully inflammatory for views?

“After reading the comments, there is a lot of hate towards noobs and casuals,” wrote quantumperception, in an effort to calm the discussion. “My question is: Were we not all, at one point, noobs?”