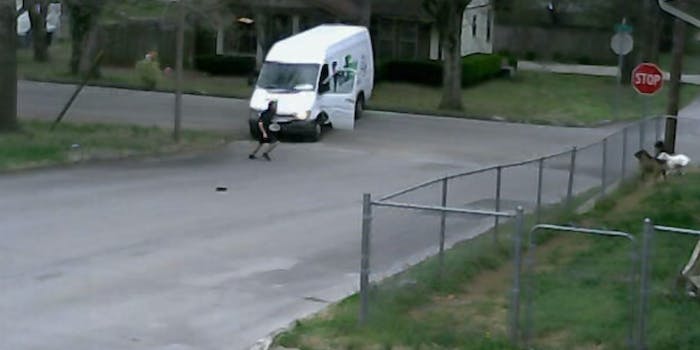 Wince your way through this video. This dude’s life is a total disaster.

One time a FedEx delivery guy showed up with a package at my door and saw that I was in the middle of ordering lunch, so he placed an improv order that I relayed to the sandwich place, and we ended up hanging out for a couple hours eating lunch and playing FIFA on my Playstation.

That delivery driver was cool—way cooler than the one in this video, who can’t seem to get his life in order. In the end, he appears to, at least in some way, have an angel watching over him.

It’s not totally clear why the neighbor has a full-color security camera transfixed on the corner of this neighborhood, but it apparently catches something pretty wild. A FedEx guy making a delivery apparently forgets to throw his van into park. It starts rolling backwards when he gets out of the truck, eventually ending up somewhere between two trees in the neighbor’s house just down the hill.

It’s so perfect, it makes me suspect that what happens here is not purely an accident. Actually, it’s almost definitely a fake.

That said, the dogs in the corner are funny—and probably legit believing this. No way to get a dog to play a joke on YouTube. Dogs are forever sincere about this stuff.