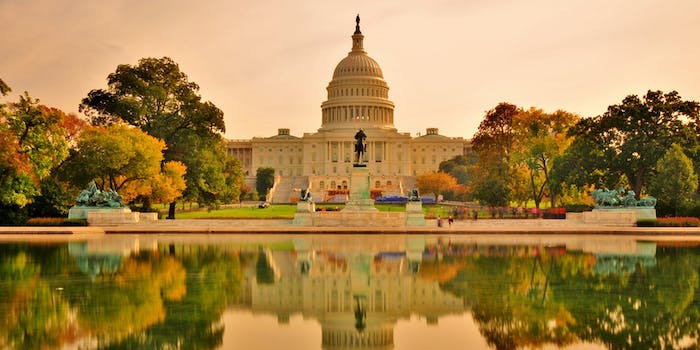 Are we hypocrites for being angry that some federal workers goof off on the job?

Congress certainly does, judging from several attempts at limiting the use of government equipment to consume pornography, including H.R. 5628, proposed by Republican Mark Meadows (N.C.) this month. The bill primarily reiterates existing policies regarding the use of government computers and other tech—a response to a recent case involving an outstandingly porn-obsessed EPA employee.

Two different issues are coming up here: One has to do with government efficiency, and the other to do with moral panic. Arguably, employees of any agency or company should be focused on work-related tasks while at work, and one struggles to imagine how an EPA employee could accomplish weekly targets with only 10 hours to do so.

Hilariously, every single member of Congress actually receives a free monthly copy of Hustler, courtesy of Larry Flynt. The publisher has successfully batted down a number of challenges to the unwanted mailing, arguing that it’s an exercise of his right to free speech. In a classic example of a wry court decision, a D.C. District Court asked to address the issue noted: “Receiving Hustler once each month would not unduly burden a Member of Congress. Members are not forced to read the magazine or other of the mail they receive in volume. We cannot imagine that Congressional offices all lack wastebaskets.”

Like other U.S. workers, federal employees work more than any other group of workers in the industrialized world. Notably, working long hours doesn’t actually increase productivity or efficiency:

The perplexing thing about the cult of overwork is that, as we’ve known for a while, long hours diminish both productivity and quality. Among industrial workers, overtime raises the rate of mistakes and safety mishaps; likewise, for knowledge workers fatigue and sleep-deprivation make it hard to perform at a high cognitive level. As Solomon put it, past a certain point overworked people become ‘less efficient and less effective.’ And the effects are cumulative. The bankers Michel studied started to break down in their fourth year on the job. They suffered from depression, anxiety, and immune-system problems, and performance reviews showed that their creativity and judgment declined.

Federal employees have fallen into the common American trap of believing that worth can be measured in the number of hours spent at work—and that problem is compounded by expectations that all workers put in at least 40 hours each week. Despite evidence demonstrating that long hours don’t produce results, the culture of overwork persists in government jobs.

This is because federal offices, like other workplaces in America, are filled with people who are doing things other than working. Workers are playing games, checking their email, and, apparently, watching porn—no matter how they’re amusing themselves, it isn’t by doing a bit of light filing or finishing off reports. Tellingly, workers who actually stay on task the least are those who are most content in their jobs. Some workplaces are even starting to welcome a less structured environment with more room for play.

Given how much Congress enjoys gridlock, to the point of letting the federal government shut down on the basis of ideological principles, Congresspeople seem like the least reliable authorities when it comes to efficiency.