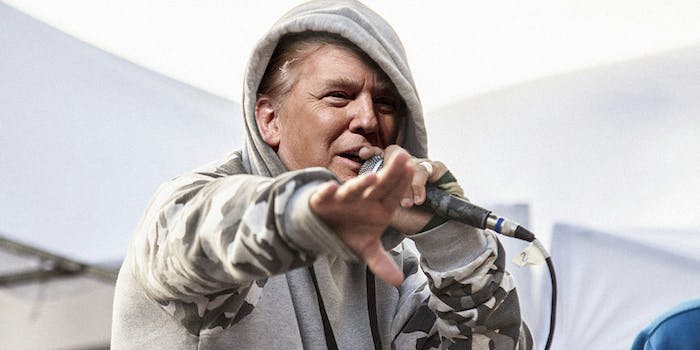 Is he releasing an album or providing federal aida?

As Hurricane Irma heads toward Florida, residents in the affected areas are trying to figure out how to seek shelter or evacuate their homes safely. President Donald Trump, who was criticized for his odd comments about Hurricane Harvey, tweeted about Irma on Friday. He warned residents to “get out of its way, if possible.” Then he declared that “Federal G is ready!”

Hurricane Irma is of epic proportion, perhaps bigger than we have ever seen. Be safe and get out of its way,if possible. Federal G is ready!

“Federal G” is likely shorthand for the federal government. But Trump has created new words and phrases in the past (remember covfefe and Easy D?) and left the internet to define them. So it’s entirely possible that Federal G is a codename for something else. Many people on Twitter said it sounded like the name of a rap artist.

FEDERAL G is about to drop the HOTTEST TRACK of 2017, F-F-F-FEDERAL AIIIIIIID

Tonight and Tonight only:
Federal G feat. Notoroius G.O.P. kickin' it in a rap battle of epic proportions!

It’s unclear if Trump plans on releasing a rap album or not. But he somehow managed to make a tweet about a disaster circle back to himself and his efforts.