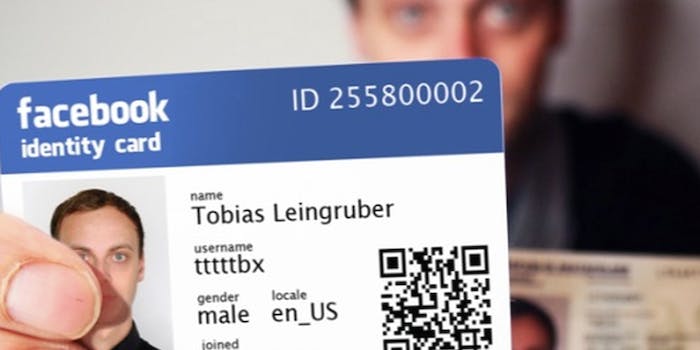 Facebook’s lawyers haveshut down an online art project meant to make a point about online identity.

Citing trademark violations, the social media giant sent a cease-and-desist notice to Tobias Leingruber, an artist who set up the website less than a week ago.

Last Friday, Leingruber launched FBbureau.com, a site which critiqued Facebook’s user privacy (or lack thereof.) The German artist prototyped a Facebook Identity Card, which he purported to mass produce on the site.

Since Facebook makes some information about all users public, he didn’t need individuals’ permission in order to discover their real names, locations, gender, and more in order to print on the card. If the project had stayed up, Leingruber’s announced intention was to distribute these cards, unprompted, to Facebook users.

“[A] future where a Facebook Identity becomes more important than any government’s doesn’t seem unrealistic,” he wrote on the site.

However, Facebook sent its legal threat before he could send out a single card. While Facebook has engaged in some questionable trademark actions—attempting to shut down sites which used “Face” or “Book” in their names, for example—Leingruber’s labeling of his project as “Facebook Identity Cards” seems like an open-and-shut case of trademark infringement.

However, he could well have made an argument for the project as satire, which courts have mostly found is protected from trademark actions. Facebook’s trademark may be safe, but the social network is left looking like it lacks a sense of humor.

Leingruber has since taken down the site, thanking users for making the project a success.

“The content on this webpage has been removed as requested from Facebook Inc.,” he wrote. “Thanks everyone for your overwhelming positive feedback and for engaging in valuable discussions. You have made this project valuable. Et voilà – A piece of (social media) art.”

Leinburger told Co.Design, an offshoot of Fast Company, that he didn’t plan to talk to a laywer, even though he thought Facebook was in the wrong.

“I’d rather work on new ideas instead of talking to lawyers,” he told them. “I think the idea and my thoughts have been planted, and so I came to decide that I’m actually fine with taking the website offline.”

The thought had indeed been planted—now a second German artist, Moritz Tolxdorff, made a prototype for a Google+ ID card. So far, Google has made no moves to shut him down.