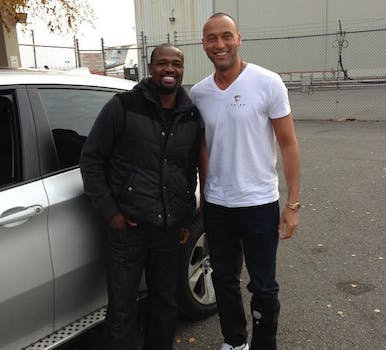 Days after "Fat Jeter" racked up huge shares on Facebook, users are spreading a new photo of the shortstop. In this one, he's slim as a beanpole.

The true test of whether someone’s fat or not, apparently, lies in the latest picture to circulate around the Net.

Mere days after a photo of New York Yankees captain Derek Jeter, sporting a noticeable potbelly, racked up huge shares, Facebook users are spreading a reportedly new photo of the shortstop. In this one, he’s slim as a beanpole.

That first photo, which ran on the New York Post’s front page Friday—headline: “DEREK EATER”—went viral. Even BuzzFeed poked fun at “Fat Jeter.” It clearly was captured at a less-than-ideal moment for the multimillionaire shortstop, currently rehabbing an ankle fracture.

But a newer photo, posted by the MLB Network, shows a noticably slimmer Jeter standing with analyst Harold Reynolds. Snapped Sunday, it “sets the record straight on The Captain’s weight,” according to its caption.