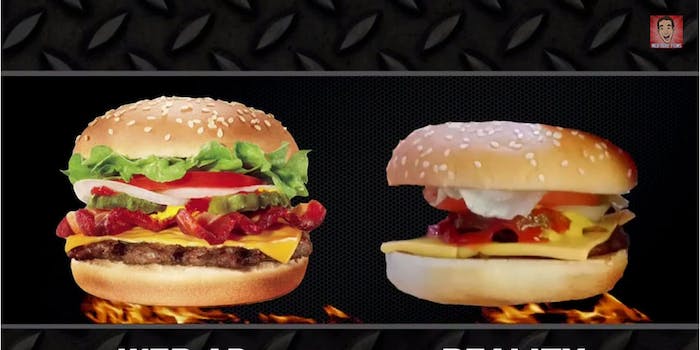 When you see a commercial for McDonald’s, scrumptious images of thick beef burgers, lush vegetable toppings, and crispy golden fries are splashed across your screen. Before you can say “I’m lovin’ it,” you’re off to the Golden Arches, where you plunk down the better part of $10 for recently-thawed slabs of gray-colored crap that don’t appear to be 100 percent edible. What gives?

Greg of the YouTube channel Mediocre Films decided to answer this question for himself. He visited his local McDonald’s, Jack in the Box, Wendy’s, and two Burger Kings to see if the employees at each establishment could replicate what he saw in Web advertisements for the fast food giants.

“We just follow the rules,” a Burger King manager tells him. “Some of the pictures, they don’t look nothing compared to what we make.”

When Greg politely asks the employees to re-make each food item to look a little more like the advertisements, they all oblige. Perhaps the “second take” sandwiches appear a little better because they’re held in place with all of the spit that was no doubt hocked into his food.

On the other end of the spectrum, fast food companies are eager to school the public on how exactly its food and advertisements come together. For example, if you’ve ever wanted to go behind the scenes of McDonald’s advertisements, McDonald’s Canada has you covered.

Another video show exactly how the chain’s Chicken McNuggets are prepared. It was a response to a viral image of pink slime that allegedly filled each and every piece of bite-sized chicken.

Of course, company-sanctioned videos that aren’t supposed to be seen by the public at large lift the curtain on precisely how to prepare certain menu items. Take, for example, a rap-style Wendy’s employee training video that reveals what goes into the chain’s chili (starts at 9:49).

While not every fast food customer will have their quickly-prepared lunches precisely match what is seen in photographs, Greg claims that a simple request is all it takes to right that wrong.