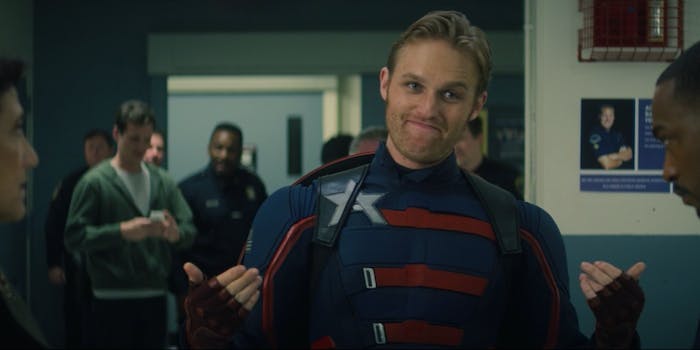 Falcon and the Winter Soldier/Disney+

There’s just something about John Walker (Wyatt Russell), the new Captain America in Falcon and the Winter Soldier, that immediately rubbed us the wrong way when he first walked out with Steve Rogers’ shield. And while episode 2 took great pains to show us the man behind the shield, it also transformed his meme status into something both entirely memorable and completely familiar.

Warning: This article contains spoilers for Falcon and the Winter Soldier.

“The Star-Spangled Man” opens with a view of Walker’s Captain America that most people won’t get to see. Sitting alone in his old high school locker room, he’s insecure and vulnerable, and he expresses his own doubts to his wife Olivia and his best friend Lamar (who fights alongside Walker as Battlestar) before heading out to the field to put on the charm for Good Morning America and audiences in the field and at home. And to be sure, Walker is incredibly charming to just about everyone except for Sam Wilson and Bucky Barnes, who would rather walk miles to an airport than share a ride with Walker.

But by mid-episode, that façade has already started to fade. We see Walker wield the privilege that comes with being the new Captain America to bail Bucky out of jail after Bucky was arrested for missing his court-appointed therapy session, but Walker has an ulterior motive. He wants Bucky to help him take down the Flag-Smashers, his mental health be damned.

“He’s too valuable of an asset to have tied up,” Walker explained. “So just do whatever you got to do with him, then send him off to me.”

A subsequent scene in which Walker tries to get Sam and Bucky to help him spells out the limits of Walker’s willingness to help. He’s willing to put his neck out on the line for them as long as they give him something in return, but when they refuse, they become a hindrance.

It didn’t take long for Walker to become the MCU’s poster child for a certain kind of white man: One who will use his privilege to help others as long as it also benefits him. Walker is a contrarian, someone who argues in favor of offensive talking points in a manner that suggests, “I’m just saying!”

While the idea that John Walker was a poster child for white male privilege quickly set in, there’s an argument that the reason why Walker irks us so much is something a bit more nuanced.

“For me, rather than an edge lord or alt-right guy, I see the actual Ranger tabbed/Pathfinder officers I worked with,” @VyceVictus wrote. “Upstanding figures of great ability and character who could also be *Huge* assholes. And that dichotomy was not a paradox, one aspect informed the other.”

As “The Star-Spangled Man” demonstrated, Walker is, above all else, a complicated guy. He’s extremely competent and he’s got an impressive military background, but when things don’t completely go his way, he starts to lose his cool. He’s familiar in a way that most Marvel antagonists aren’t. He’s a man (without powers—for now, anyway) who weaponizes his privilege but only as far as it benefits him, and we’re probably far more likely to see a John Walker in our lives than a Thanos or a Loki.

Those interactions leave us with a bigger question: Will Walker just be a thorn in Sam and Bucky’s side, or will that eventually lead to Walker becoming a more overt villain?