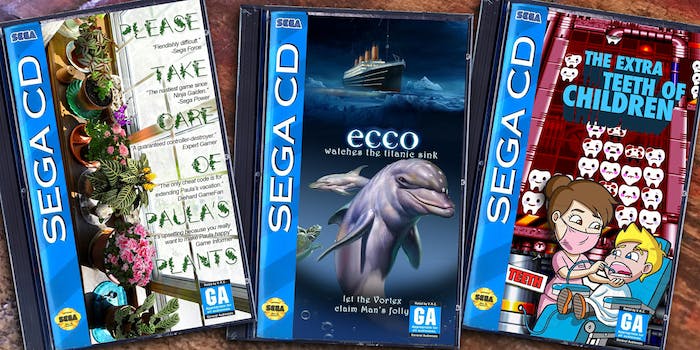 Cool Spot knows where the bodies are hidden.

The Sega CD was a cutting-edge video system for its time—the “console wars” era of the early ’90s— but by 1995 it had been entirely abandoned as Sega shifted focus to its disastrous next-gen system, the Saturn. Still, some people fondly remember the Sega CD. And one of them has made a very good Twitter account featuring box art for absurd, made-up Sega CD games. It’s one of the few things on the internet right now with the potential to make you laugh uncontrollably.

Writer Brian Firenzi originally launched @segacdgames in March 2016 with a handful of tweets, but it went on a months-long hiatus until early this year. Now it’s back, and it’s really hitting its stride. The fake games range from unlikely movie adaptations to depressing real-life situations to grim takes on actual games. Also, there’s this, the viral tweet that finally put SegaCDGames on the map:

The fans may have come for “Dunston Fucks Good,” but they’re staying for wild stuff like “Doing Donuts on John Madden’s Lawn ’93,” “Ernest Hemingway’s ‘A Farewell to Arms’,” and “Leisure Suit Tilda Swinton.”

Some of the entries are just on the edge of being something you’d want to play, while others fall into the category of “too real.”

Where Are My Goddamn Keys pic.twitter.com/LbgS47WoTV

Why in the World Did Carmen Sandiego Drop a Dookie in My Toilet Tank? pic.twitter.com/iU2sTuwGsx

More recently, Firenzi has started mixing in over-the-top Sega CD fan tweets, giving the account the character of the exact psychotic game fan who would play and collect these psychotic games.

Me when the crew says Dreamcast better than sega cd pic.twitter.com/wlMeBvdJMj

[to the tune of "all the small things"]

We can never go back again.