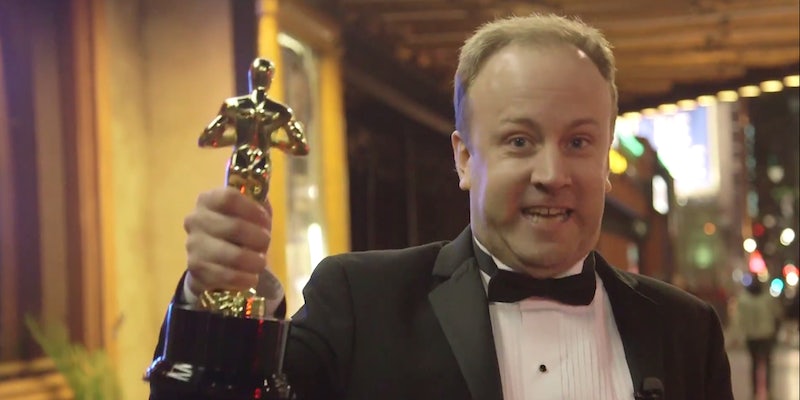 This guy proved that if you have an Oscar statuette, everyone in Hollywood treats you like a king.

We all know that celebrities are constantly showered with free stuff, especially during awards season. But what if you’re one of the more “normal” Oscar winners in a category like sound design or editing? Do you get the same treatment?

As it turns out, you do. This prank video proves that if you wander around Hollywood with a fake gold statuette on Oscar night, people will treat you like a king. (Of course, it helps that this YouTube hoaxer is a schlubby white guy in a tux, the ideal demographic for behind-the-camera Oscar winners.)

That Oscar gets him everywhere. At one point he tries to get into an exclusive bar without ID, and the bouncer says, “The Oscar is your ID.” Elsewhere he gets free drinks, women’s phone numbers, and praise from total strangers. The night ends with someone apparently allowing him to drive off in a free car.

Our fake Oscar winner rounds off the video with an inspirational message about how the prank made Hollywood success seem more accessible. We have our doubts, though. If a YouTube hoaxer is the only Oscar winner these people are ever going to meet, doesn’t that kind of prove the real winners are inaccessible? There’s something kind of grim about a con artist holding a fake Academy Award aloft in a Hollywood bar and shouting, “Dreams come true!”

We look forward to Leonardo DiCaprio playing this role in the feature film adaptation.