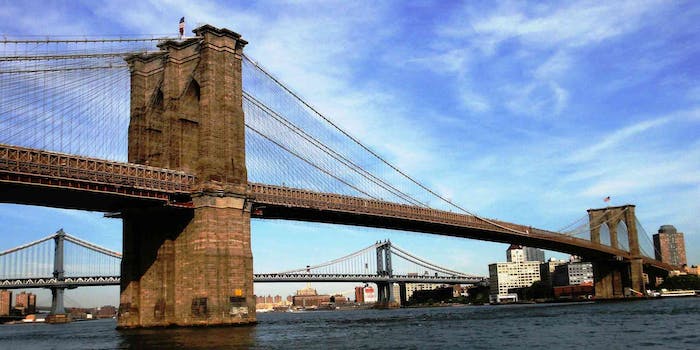 Reading the bio of a Twitter account is apparently a bridge too far for busy journalists. Earlier today, after New Yorkers noticed that the Brooklyn Bridge’s American flags had been replaced with blank white flags, a Twitter account parodying New York City’s so-called “bike lobby” jokingly took credit for the swap, writing, “Earlier today we hoisted two white flags to signal our complete surrender of the Brooklyn Bridge bicycle path to pedestrians.”

Evidently the account’s parody status was lost on a few major media organizations, including the New York Daily News and the Associated Press, which ran with the tweet as if it were genuine.

“Stick a front fork in us, everybody. Our work here is done,” wrote the fake Bike Lobby as it shared a screenshot of the AP story, which initially began, “Bike path advocates have taken responsibility for the appearance of two mysterious white flags on the Brooklyn Bridge.”

Stick a front fork in us, everybody. Our work here is done. @AP pic.twitter.com/ndEVkdzxZq

The Bike Lobby account continued to have fun at the journalists’ expense throughout the afternoon, tweeting jabs like “How many Daily News reporters does it take to not fact-check a story?” and “If you believe we’re for real, we have a bridge in Brooklyn we’d like to sell you.”

The idea of a mysterious but influential bike lobby in the city stems from a rant by Wall Street Journal editorial board member Dorothy Rabinowitz about the menace of bicyclists on her fair city’s streets. In the rant, which immediately went viral, Rabinowitz bemoaned “a city whose best neighborhoods are begrimed by these blazing blue Citibank bikes.” She ended her rant by saying, “The bike lobby is an all-powerful enterprise.”

There may not be a nefarious bike lobby holding sway over the city’s affairs from smoky back rooms, but if there were, its members certainly wouldn’t appreciate all the attention that @BicycleLobby received today.

Whoever runs the parody account had little sympathy for the journalists who confused it for the real cabal of Dorothy Rabinowitz’s nightmares. “To be fair,” it wrote snarkily, “we don’t reveal we’re a parody account until the second line of our profile.”