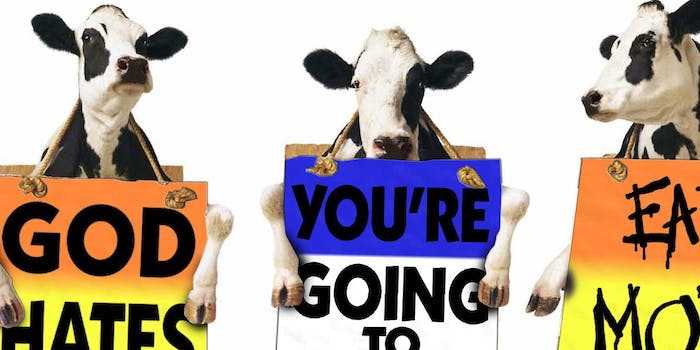 Several reports about Chick-fil-A—including allegations that the company faked a Facebook account—have gone viral this week, but what's real and what is the Internet exaggerating?

Ever since July 16, when Chick-fil-A president Dan Cathy said he was “guilty as charged” when it came to allegations that he opposes any marriage but “traditional” ones, the fast food joint has been dealing with fallout from the Internet. It didn’t help that Cathy then went on a radio show to proclaim “I think we are inviting God’s judgment on our nation when we shake our fist at Him and say ‘we know better than you as to what constitutes a marriage.’”

To that end, Chick-fil-A’s supporters and critics have posted all kinds of information about the controversy around the company. But, as often is the case online, the truth of some of that information is up for debate. To that end, the Daily Dot fact-checked three Chick-fil-A-related photos that went viral this week.

The Internet was abuzz Wednesday morning over a screengrab of an argument on Chick-Fil-A’s Facebook page. On it, a young woman named “Abby Farle,” fought critics on Chick-Fil-A’s behalf—but “Farle” showed several signs of being a fake account. One enterprising Facebook user tracked down her photo and realized the woman depicted was a stock photo model. Moreover, as another Facebooker noted, the account had only been created eight hours earlier.

Major sites like Gizmodo reported this as evidence that Chick-Fil-A, or someone working on their behalf, was creating fake Facebook accounts to save the chicken joint’s image.

It bears noting that Facebook conversations are notoriously easy to fake. Abby Farle does not currently appear on a Facebook user search, suggesting the account has either been deleted or made private.

The fast food chain told the Daily Dot in no uncertain terms that the company had nothing to do with Abby Farle, even indirectly. “Chick-fil-A has not created a false Facebook account, page, or persona of any kind,” a representative said in an email to the Daily Dot. Moreover, the theory that a third party that does public relations work for the company might have created the account is “absolutely not true,” she said.

Of course, Chick-fil-A and the PR firms it hires aren’t the only groups that support Chick-fil-A. The account could have been created by a Chick-fil-A fan or one the lobbying organizations the company donates to.

As redditor AzMoo wrote, “Anybody who’s part of an organization that Chick-Fil-A supports would do this.”

The letter from Boston’s mayor

Another image that made the rounds is a scanned letter, supposedly from Boston mayor Steven Binnie, to Cathy. In it, the mayor urges the restaurateur to “back out of your plans to locate in Boston.”

“There is no place for discrimination on Boston’s Freedom Trail and no place for your company alongside it. When Massachusetts became the first state in the country to recognize equal marriage rights, I personally stood on City Hall PLaza to greet same sex couples.”

That one’s real, a representative for the mayor told the Daily Dot. “It’s from July 20,” she noted—four days after Cathy’s remarks were published. A Chicago alderman has also expressed a desire to keep the company from opening new franchises in his city.

The last image to go viral is a sign placed on a Chick-Fil-A counter that reads:

“We apologize for any inconvenience but as of 7/19/2012 Chick-fil-A has voluntarily recalled all of the Jim Henson’s Creature Shop Puppet Kids Meal toys due to a possible safety issue. Please be advised that there have not been any cases in which a child has actually been injured, however there have been some reports of children getting their fingers stuck in the holes of the puppets.”

A redditor posted a second, similar notice from a Chick-fil-A in Austin. It reads, in part, “”The Jim Henson puppets were voluntarily withdrawn strictly for potential safety concerns.”

But according to the Jim Henson Company, which announced Friday it was severing ties with Chick-Fil-A, the split was ideological, and not Chick-fil-A’s choice:

“The Jim Henson Company has celebrated and embraced diversity and inclusiveness for over fifty years and we have notified Chick-Fil-A that we do not wish to partner with them on any future endeavors.  Lisa Henson, our CEO is personally a strong supporter of gay marriage”

So who’s not telling the truth? The Jim Henson Company has repeatedly refused to talk to reporters and referred them to Chick-fil-A instead. (They also did not respond to an immediate request for comment from the Daily Dot.)

Chick-fil-A told the Daily Dot that neither side is lying, and that it’s all a coincidence.

Chick-fil-A made the decision to withdraw the Jim Henson toys in our Kids Meal offerings on a proactive and voluntary safety basis.  Our chain was in these discussions early into last week and made the decision to make the product withdrawal on Thursday, July 19 (the date we made the chain-wide announcement).  Mr. Henson’s announcement that his business would no longer work with Chick-fil-A was made the next day, July 20.  The timing is simply coincidental.  There is no correlation between the two decisions.

It’s worth noting that the representative used the word “withdraw” to describe the process of removing the toys from restaurants, rather than recall, as was the case with the sign that went viral, which called it a “recall.”

As redditor mcaffrey notes, if Chick-fil-A is stretching the truth to save face, they might have incurred legal trouble.

“That seems libelous,” mcaffrey wrote. “If there really isn’t a safety concern, I wonder if that is actionable for a lawsuit.”