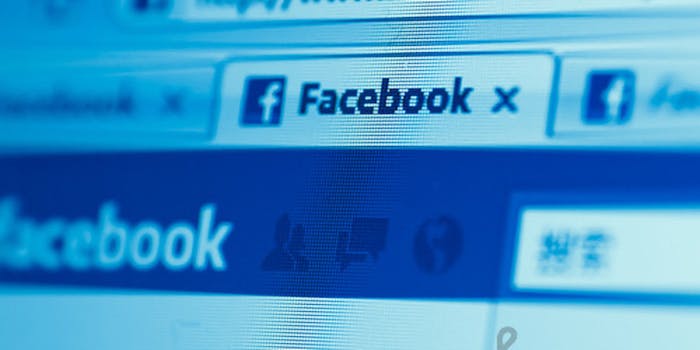 You can break up with Facebook, but it'll never get over you.

I’ve only had one real breakup, the kind that leaves a mark on you and traces of wreckage in your life. The kind with debris—artifacts from the relationship you didn’t even realize you accumulated. Neil Sedaka lied: breaking up is easy. It’s separating your lives that’s the hard part. When he moved out, he took half of our stuff with him, the things he won in what we called the “divorce.” You never realized how much you own until half of it isn’t yours anymore, divided as arbitrarily as picking sides in gym class. But the choosing gives you a sense of momentary purpose. You’re putting your name on something, claiming it as yours, even if the difference from what is his is negligible. It’s small, but it’s a start.

Most breakups are like this. Your boyfriend goes, calling you only to check in when it’s seasonally appropriate (a birthday or such) or when he’s completely drunk. It’s messy, but it’s human and it gets better with time.

But Facebook isn’t that kind of boyfriend. Facebook doesn’t leave or let you start a life that’s separate from the one you knew together. When you break up with Facebook, Facebook reminds you of the friends you’ll be losing in the split. “Won’t you miss Max or Sarah?” Facebook asks, as if it knows all your friends will pick Facebook over you. Although emotionally manipulative, Facebook is probably right. 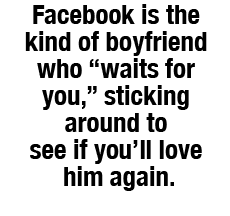 You know that, like every breakup, you’re going to be less connected to a lot of the people you knew before. You might not hear from them, now that things are different. You’ll be different people.

Even after Facebook tries to guilt you into staying, you still can never leave, even if you want to. Facebook is the kind of boyfriend who “waits for you,” sticking around to see if you’ll love him again. Should you deactivate your account, Facebook refuses to delete you entirely. You remain in its system, all your information saved. Facebook never forgets you, tucking all your profile pictures away as if it keeps a photo album hidden under its couch, just waiting to be pulled out. Facebook is an opportunistic creep, the kind who won’t stalk you but thinks about it, waiting for the right moment. If you log into your Spotify account without realizing it’s linked to Facebook, Facebook secretly reactivates, pretending nothing went wrong between you. It knew you would come back. It waited for you.

I broke up with Facebook in January as a way to reclaim my life—without the burden of our creepy codependency getting in the way. Facebook simply had too much power in the relationship, and I needed to figure out who I was by taking some time apart from social media. Instagram understood, fading away into the sunset with the gentle grace of a Walden filter. Twitter was less forgiving. It won’t wait around for you to find yourself; it gives you 30 days before it deletes you entirely, throwing your contacts and all your stuff to the curb. Facebook, meanwhile, won’t let go, saving the smallest status like a college sweater that still smells vaguely like you. Facebook will say that it was saving it for you, but you get the feeling that Facebook needs the memories more than you do.

Since the breakup, people always ask if I miss Facebook. I want to lie and say I don’t. I want to be all Angela Bassett in Waiting to Exhale about the situation, smoking an impossibly long cigarette while I burn the past to the ground. But it’s not so simple. A life spent with Facebook has its perks; it’s like being part of the ultimate power couple. You get invited to more parties and you always know what’s going on. When you’re with Facebook, people are interested in what you’re doing, so much so that it becomes a necessary part daily life. Without this relationship, it’s hard to even function on a basic level, let alone process reality. Who will you tell about the horrible woman in line in front of you at Starbucks? Who will you complain to about your day? You have to figure out how to be your own support system.

The first week is the most difficult, which is true of quitting anything, whether it’s a relationship, smoking, or realizing you have no more Breaking Bad episodes left. Facebook is different because your carton of addiction is always within reach, and you can never run out. Cigarettes are exhaustible, but your feed goes on forever. At first, it’s hard to remember what you did before Facebook. How did you ever remember someone’s birthday or make plans for a Friday night? What was throwing an Oscar party like before you could instantly invite 300 of your closest friends? You might never remember; not all of our memories come back. But you make new memories and figure out new ways of being. You become a person who sends Evites to keep up with all your old friends. You knit more. Basically you turn into a grandmother. 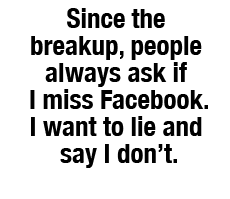 Like every relationship, the draw of Facebook is the sense of normalcy and stability it provides every day. You never wake up and find yourself alone—Facebook is right there next to you. You’ll always be tempted for those comforts. On my phone, I can’t even delete the app from my homescreen. It’s part of the phone. While some might find it difficult to live with that reminder of your past life starting you in the life (like living with an ex after the breakup), there’s something empowering about proving to it how well you’re doing. You don’t even need Facebook anymore. In fact, you’ve been seeing your Kindle a lot more recently, since you have all this free time, and things are getting serious. You’re growing as a person in ways you wouldn’t let yourself before, when you were so devoted to this one part of your life. Facebook will never understand that. But it never got you anyway.

You might think that Facebook will eventually forget about you, but it won’t. Like every sad Romeo of an ex-boyfriend, it will continue to beg for your affections and write sonnets outside of your window. That sounds romantic from a distance, but just ask Rosaline, the original object of Romeo’s all-consuming affections. At first that intense devotion is flattering, but eventually you just want him to move on and find a mouth-breathing 14-year-old virgin who will reciprocate the level of obsession he needs. As a result, you might be the girl who doesn’t even get to be in the story, a footnote to a play that will go on without your participation, but slowly it will stop mattering. Even if Facebook still wants everyone’s unconditional love, you do hope that it will eventually settle down with a nice girl—or at least one whose apothecary knows what a placebo is.

In the meantime, you have something better than love—you get to be in your own story. You get to put your own name on something that you don’t have to share—not with the world and not with anyone. It’s small, but it’s a start.