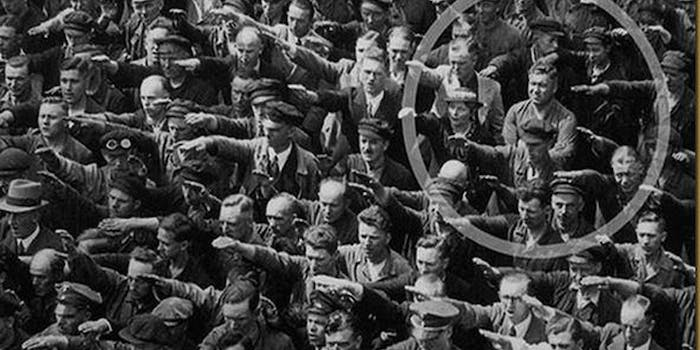 Facebook users are passing around a touching image of morality and courage in the heart of Nazi Germany.

The photo shows a man, August Landmesser, standing with arms crossed defiantly, surrounded on all sides by men giving the Nazi salute. Reportedly taken in Hamburg in the summer of 1936, the photo was recently given new life by the Facebook page of Senrinomichi, a blog devoted to charity in Japan. It’s been shared 20,000 times and liked almost 60,000 times since it was posted Sunday.

Landmesser was a member of the Nazi party for five years, but left the year before when he became engaged to a Jewish woman, which was illegal under the regime.

In 1937, they had a baby girl, Irene. The following year, Landmesser was convicted, sent to a penal colony and drafted into the Nazi infantry, where he is thought to have been killed in action. His wife was sent to a concentration camp, where she is presumed to have died.

Irene had very little recollection of her parents, but as an adult, she researched their lives for a book, eventually published in 1998. Miraculously, she identified her father in the photograph below when it was published in 1991 by a newspaper, Die Zeit.