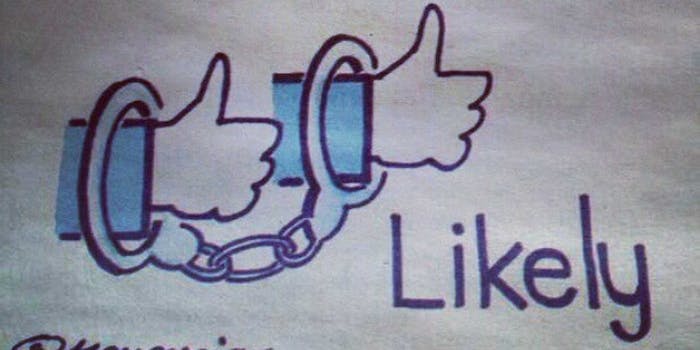 Remel Newsom's post included "kill all whites," but his lawyer argues he was just blowing off steam.

Furor over the George Zimmerman verdict has resulted in the arrest of a New York City man accused of making “terroristic threats” after posting a Facebook status that read in part, “kill all whites.”

Remel Newson, 20, of Queens, took to Facebook on July 13 to express his anger shortly after Zimmerman was found not guilty by a Florida jury in the shooting death of Trayvon Martin, an unarmed black teenager. An NYPD officer monitoring Newson’s Facebook saw the statement and felt his comments went beyond the normal levels of frustration being expressed over the verdict.

Here is Newson’s status, in full, via local NYC paper the Gothamist:

Newson was charged with making terroristic threats, a felony, for this and a separate status that quoted from a Drake song. He was arrested and his home was searched, where police found marijuana and charged him with unlawful possession. According to the criminal complaint, Newson told officers that “he f*cked up, that he shouldn’t have wrote the above statement on Facebook and that it was a stupid complaint.”

But Tasha Lloyd, the attorney representing Newson, say it was the NYPD that acted stupidly. She told WNYC that Newson’s first Facebook post was simply copied and pasted, and that he “in no way was trying to intimidate anyone or coerce anyone into doing any illegal act.” She said her client was simply blowing off steam over the Zimmerman verdict and that the statuses alone hardly gave police the legal authority to obtain warrants and search his house like they did.

Newson has two prior convictions, including one for felony assault.

Under the applicable law, making a terroristic threat includes making any statements with the “intent to intimidate or coerce a civilian population, influence the policy of a unit of government by intimidation or coercion, or affect the conduct of a unit of government by murder, assassination or kidnapping, he or she threatened to commit or cause to be committed a specified offense and thereby caused a reasonable expectation or fear of the imminent commission of such offense.”

This is hardly the first time that someone has been arrested for making violent comments on Facebook. In February, an 18-year-old in Texas was arrested for making a Facebook comment in which he joked about shooting up a classroom full of children shortly after the Sandy Hook massacre. That teen, Justin Carter, is out on bail but faces a trial and up to eight years in jail for making terroristic threats.