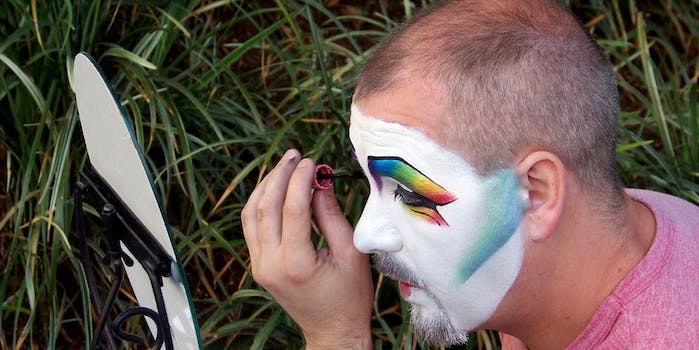 It’s a drag, but Facebook’s real name wars aren’t over

The drag queens won the latest round of the name wars, but the rest of us are still in the ring.

My name is Kitty Stryker.

It’s on my business cards. It’s on my social media accounts. It’s on the packages of far too many dresses I get from ModCloth. It’s on the various essays I’ve published, academic and personal. It’s the name I’ve used on television, in newspapers, around all of my friends and most of my family.

It is not my legal name. And, according to Facebook’s “real names” policy, which insists you use a name listed on a government ID, magazine subscription, or piece of mail alongside an ID with the same name and a photo of your face, it’s still a liability.

In many types of mythology, knowing and using the “True Name” of something gives you power over it. Faeries are often forced to bend to human will through use of their “True Name.” Rumplestiltskin’s challenge in the fairy tale hinges on the power inherent in his name. Bilbo Baggins goes to extraordinary lengths not to let Smaug know his name. It’s a constant thread in many stories. Not even God wants to give out their true name, you know?

It’s interesting to me that with all of these tales about true names and not giving them out to just anyone, society demands in various contexts to know our “True Name,” not the name of our essence but the name on our ID. I can’t count how many people have asked me “Is Kitty your real name?” like I’m using it frivolously, and if they only ask nicely, I will share my secrets with them.

Many of the people I know live their lives under an assumed name. Not just performers who embody their character on a regular basis, like the Sisters of Perpetual Indulgence, but trans people, who can’t always afford the fees to legally change their name, or abuse victims, who don’t want toxic people finding them again, or sex workers, who can lose their jobs, their homes, or their children if their legal name is exposed. Facebook is still keeping those people, the people most at risk, restricted and uncertain.

Despite what you’ve heard, this battle has not been won, and the drag queens on the steps of City Hall are celebrating too soon. Multiple people, including rope bondage expert and educator Midori, sex educator and TV show host Sunny Megatron, and adult performer Julie Simone, have had their accounts removed after Facebook’s apology.

This isn’t a case of some overblown tempest in a teacup. When I spoke to Megatron, she said:

Having previously been involved in a very abusive relationship and having to cut off all ties from that person (including obtaining orders of protection, perusing federal criminal prosecution, etc.), it was imperative to my and my family’s safety that we always remain untraceable. I have operated this way for years and never used my legal name on any form of social media.

Hiding from an abusive ex is scary enough—now that I am considered a celebrity, I am regularly contacted by people who want to harm me. I cannot risk the safety of my children, husband, or myself. I absolutely cannot have my legal name connected in any way to my common use name, Sunny Megatron.

The thing is, it’s not about the drag queens. It never was, and it hasn’t been from the beginning. Centering this discussion around drag queens doesn’t work to challenge the core issues with real name policies, and their celebration is unwarranted and possibly dangerously distracting. Reporting sprees, a form of online bullying, are still unchecked—many friends of mine in the queer porn community were regularly targeted by one user by having our photos and posts reported constantly for days, and Facebook did nothing (they even banned me when I tried to address it with them). In this case, a Secret user claimed that they had reported hundreds of profiles as using fake names. And Facebook still requires the verification of names. The verification process still requires forms of I.D. which will have your legal name.

And there’s still power in that legal name, power that’s led us to be afraid of identity theft, abusive partners, our trans status, or our history of sex work. Children are taught not to tell anyone their name online, yet adults who also try to be safe by using a pseudonym are told that we “lack integrity”. Doxxing is a major problem made far worse by insisting on legal names, and which can lead to real life professional threats, yet it’s legal. Something is rotten in the state of Denmark.

My legal name is a blank slate, and I keep it that way for multiple reasons. As a woman on the Internet, having my legal name out there can lead to me being harassed near my home, stalked, and threatened with various types of harm for writing about my experiences. As a sex worker, the threats become a lot more serious, with a lot less sympathy or room to pursue legal assistance. I’ve had text messages asking me if I found it strange how many women end up in dumpsters every year, followed up by “I know where you live.”

Facebook is only one example in the “expose your legal name or don’t use us” attitude. PayPal gives those who donate to you the name you use on your account and will delete you if they don’t think the name you’re using is a legal one. Many crowdsourcing sites will similarly demand that you use the name that checks can be written out to when using their services.

Google+ had a similar policy and is often credited as starting the Nymwars, the ongoing tensions over real name policies. After multiple years of uproar, they have changed their policy so users can finally call themselves whatever they want. People are so desperate for privacy and to use their chosen names that they’ve flocked to Ello, a site in alpha testing with barely any features, which (ironically enough) include privacy controls.

This isn’t a new issue—this has been systematically part of social media policies for at least four years. I presented on this issue two years ago at SXSW with little having changed. It’s not even new for Facebook—and what do you do when using your legal name as proof doesn’t mean you’re home free, either?

I’ve spent ten years of my life building up the personal brand that is Kitty Stryker. I chose my name and decided what my brand represented. As many jobs insisted I have a social media presence to be considered legit, I built one for my common name, the one whispered to me in bed by my lovers. It didn’t occur to me that my desire to keep my public and private life separate might lead to my exile from social media platforms. My girlfriend is still locked out of her Facebook account because she refuses to give them her legal last name, a name she shares with an abusive father. She chose her brand, her chosen life, the name her friends know her as—and she lost.

The Lord giveth and the Lord taketh away.

When I came up with the name Kitty Stryker, I knew I wanted to do sex work, but also knew I didn’t want my family to be harassed about my choices. There’s a lot of strain sometimes in being the relative of an out sex worker, and I didn’t want my introverted parents to be subjected to the Spanish Inquisition. This was a foreboding feeling, as it turned out, as I was later outed by Porn Wikileaks in an attempt to silence and shame me for reporting on their tactics. Obviously, it didn’t work—but that didn’t stop it from being scary when my parents were fielding abusive phone calls, or when I discovered my grandmother’s address on the web alongside violent threats.

Having to tell friends, family, lovers, coworkers about your sex life and how you communicate about it when a scandal hits you can feel belittling and obviously very uncomfortable. We need a policy change, not an apology.

Names are power. And you don’t want just anyone buying into that power exchange without your consent. This isn’t like storybooks, where the good guys riddle out the True Name and beat the villain. In real life, it’s marginalized people who bear the brunt of doxxing related harassment and violence, and there aren’t happy endings to those tales. Until Facebook removes the “real name” policy entirely, and implements a stronger cyberbullying policy to prevent this kind of reporting attack, it will not be a safe space.

The happy ending you can have, though, is deleting Facebook permanently.