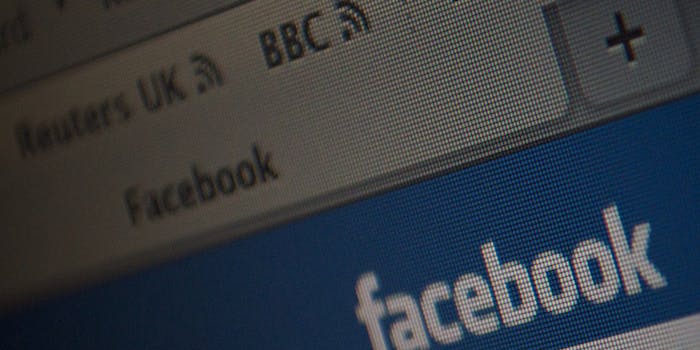 Figuring out what you're sharing and with whom will be easier, but all profiles will become publicly searchable.

Facebook hopes to start 2013 by making things easier for its users.

The social network announced yesterday that it’s releasing a slew of new features that will make it easier for users to control their privacy settings.

“We believe that the better you understand who can see the things you share, the better your experience on Facebook can be,” announced  Samuel W. Lessin, director of product at the company, via a press release.

“We continue to strive toward three main goals: bringing controls in context where you share, helping you understand what appears where as you use Facebook, and providing tools to help you act on content you don’t like.”

Among the new features will be a set of privacy shortcuts that will be located on the toolbar (the far top-right drop down menu located in every Facebook page). These ask three simple questions: “Who can see my stuff?,” “Who can contact me?,” and “How do I stop someone from bothering me?”.

Currently, users have to select “Privacy Settings” from the same drop down menu. That redirects them to a new page with even more options.

Lessin and his team have also changed the way Facebook app notifications ask for your permission. Currently, any time you use a new app, a popup appears asking you for permission to access your profile information. It also asks whether it can post to your timeline on your behalf.

The new feature breaks up this process into two separate popup windows so that users “have more control over what [they] share.”

Facebook also announced a new component that notifies people where content may still appear if they choose to hide it from the timeline. 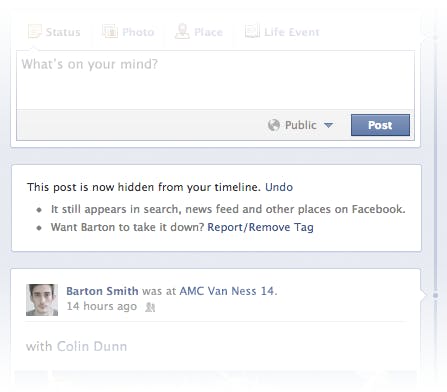 The product team also unveiled a new tool that makes it easier to untag yourself from unflattering and/or unwanted photos. Facebook subscribers will soon be able to select more than one photo and instantly untag themselves from them, streamlining what can usually be a laborious process. The feature, much like the previous one, notifies users where those photos might still be seen. If individuals aren’t satisfied with merely untagging themselves, they can also request that the owner of the photo delete it from the site. 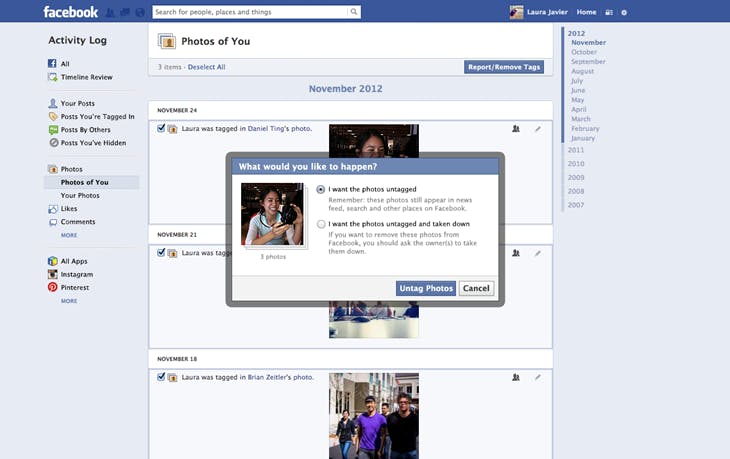 But whereas the previous features enable users to take further control of their privacy on the social network, at least one new change leaves them exposed.

“Who can look up my timeline by name,” a setting that let users limit and control who could find them using search, will be removed. Facebook’s logic for the move stems from its supposed ineffectiveness.

“The setting was very limited in scope, and didn’t prevent people from finding others in many other ways across the site.”

Facebook plans on rolling out the new features towards the end of 2012.