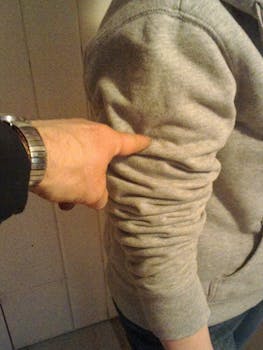 The much-derided "poke" feature on Facebook is now in hiding.

The Facebok feature “without any specific purpose” has even less of a purpose.

Facebook quietly hid the “poke” button as part of a series of ongoing upgrades to its functionality. What was a main feature when the site started gaining widespread popularity in 2007 has become either a punchline or an annoyance for many users.

An early version of Facebook’s FAQ said,  “When we created the poke, we thought it would be cool to have a feature without any specific purpose. People interpret the poke in many different ways, and we encourage you to come up with your own meanings.” Users did, but it was hard to ignore the double-entendre, which went on to be mocked in YouTube videos and on South Park.

Users seemed nonplussed by the change. A Kurrently search of “Facebook” and “poke” showed more of the stale jokes that have been a mainstay on the 750-member social networking service than reaction to news of its downgrade.

“I love to Poke and getting Poked! Why Facebook why?” Mohd Hisham tweeted Tuesday morning.

Users can, however, still poke friends. The feature has just been moved to a drop down menu on the upper right hand side of a friend’s profile. To poke now requires two clicks instead of one.

As reported by ZDNet (and as clear of indication as any that most users had not been poking in recent months), it was unclear when the change was made. The best guess was “in the past month or so,” either when Facebook changed privacy features or added improvements to its Friends features.

We reached out to Facebook but have not heard back yet.

While most users may not have even noticed the change, some may be relieved.

“I hate when old bitches think they can just poke me on Facebook *sigh*,” @MizzleSW tweeted on Tuesday.