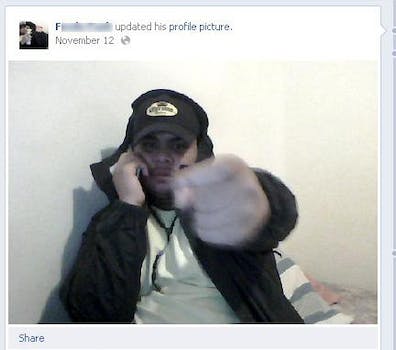 The Philadelphia District Attorney asked Facebook to take down a page threatening the life of a key witness. Facebook said no.

In November, 22-year-old Philadelphia native Freddie Henriquez got his hands on sworn statements from a government witness. She was a straw buyer for Henriquez’s alleged drug dealing pals—meaning she’d purchase guns for them so they could avoid background checks—and her statement apparently implicated them in that very illegal activity.

Henriquez posted all eight pages of the statement to his Facebook wall alongside a post calling for all “rats” to be killed “point blank period.” It was quite clearly a direct threat on the witness’s life.

Facebook prohibits bullying, intimidation, or harassment of other users. Surely the company would remove those posts and ban Henriquez from its site. The Philadelphia district attorney’s office pleaded directly to Facebook founder Mark Zuckerberg to take down Henriquez’s posts. 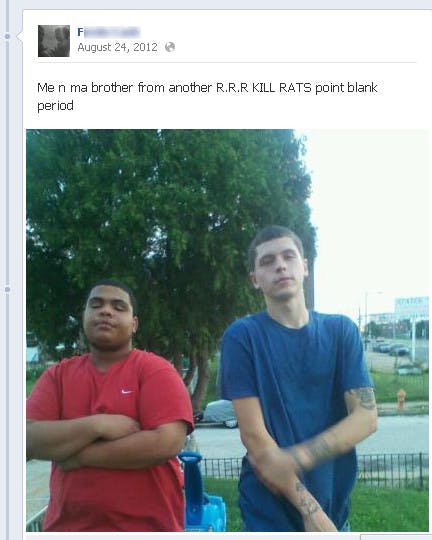 Freddie Henriquez (left) and David Ruiz, a family member of the witness, pose in a Facebook photo calling for “rats” to be killed “point blank period.”

In a statement to the press, Philadelphia DA R. Seth Williams claimed his office sent multiple requests to Facebook asking them to remove the page, beginning in November. Williams claimed It actually violated two sections of Facebook’s terms of service, namely

• You will not bully, intimidate, or harass any user…

• You will not use Facebook to do anything unlawful, misleading, or discriminatory.

Facebook reps looked over the documents and decided there was nothing threatening about them. They told the DA’s office nothing on Henriquez’s page violated Facebook’s terms of service. When Williams asked to speak with someone on the phone, Facebook again refused.

“By ignoring our pleas and continuing to allow these images on your website, you are contributing to the culture of intimidation and fear that exist in this city, where witness intimidation permeates our neighborhoods and courtrooms,” Williams said in a statement. 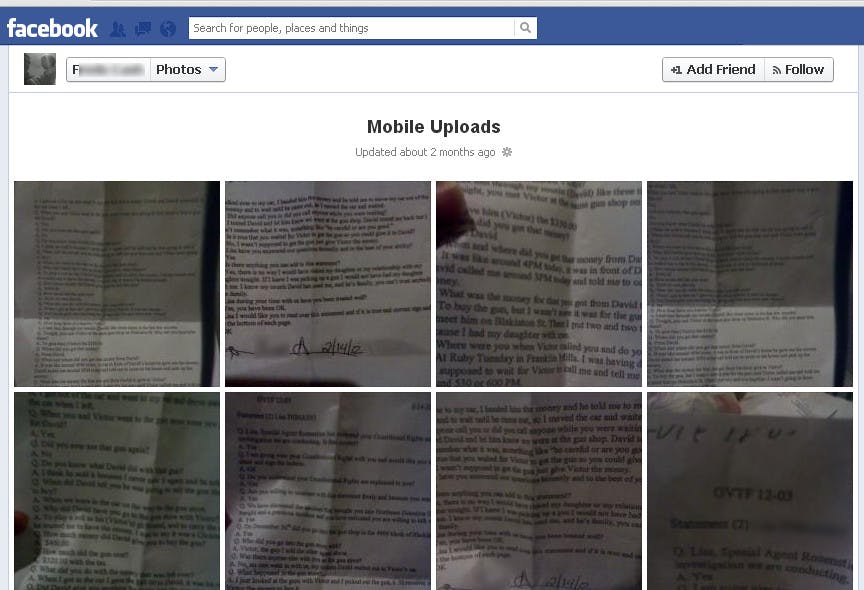 Henriquez apparently got the documents from 21-year-old David Ruiz, a relative of the witness who runs with Henriquez’s gang and was arrested in January on gun charges.

Police arrested Henriquez on Dec 17, charging him with witness retaliation, witness intimidation, and terroristic threats. He was somehow able to scrounge up $25,000 to pay 10 percent of his $250,000 bail, and was released Feb. 1. A few days after his release, the images of the witness statement disappeared from his Facebook page.

But Williams doesn’t believe for a second Facebook deleted them. He thinks Henriquez, now free from jail, took them down himself after seeing his name in local media. Indeed, his posts calling for “rats” to be killed haven’t gone anywhere.

Williams said in a statement:

“I take no comfort in the fact that this defendant was able to raise $25,000, got out of jail, and removed some of the life threatening material on his own once his name was in the paper. This should have happened in November when this office first approached Facebook’s security team.”

Using “rat” as a term for a witness is hardly a complex bit of metaphorical wordsmanship. Surely Henriquez’s fellow gang members know exactly who he was talking about and what he was suggesting they do to her. So how could Facebook possibly claim the images didn’t violate their terms of service? Facebook, like most social media companies, refuses to comment on individual accounts as a matter of policy.

That leaves us to only scratch our heads over what is a very troubling scenario: A Facebook staffer apparently looked over a page that threatened the life of a government witness—a clear violation of the company’s own terms of service—and then decided to do absolutely nothing about it.

All photos via the office of Philadelphia district attorney R. Seth Williams