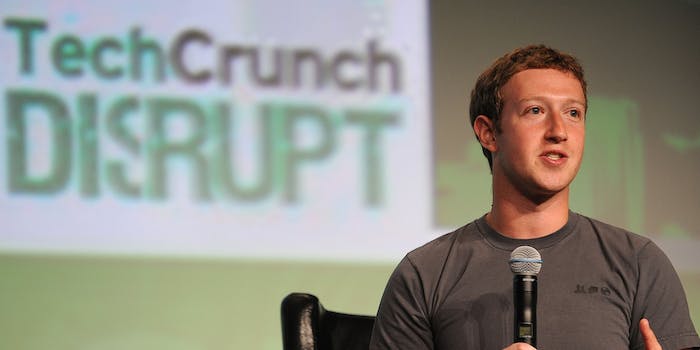 Mark Zuckerberg is throwing things at the wall and seeing what sticks.

Watching Mark Zuckerberg at Facebook’s F8 developer conference often felt like watching someone throw pasta at a wall to see if its done. Making Messenger its own platform, introducing 360-degree video, embeddable video, an “On This Day” feature, and its own Internet of Things (IoT) platform are certainly the notes any major company should be playing, but they lack a consistent continuity between each other.

While Facebook is absolutely a wildly successful company with inherent risks, it’s actually making more enemies the more it attempts to do. Facebook has now existed long enough to have its role institutionalized: The family-friendly, mainstream photo album to present yourself to the world. As its user base grows older and teens find their needs met by Snapchat, Instagram, Tumblr, and Reddit, Facebook faces the scary risk of becoming an aging relic. By casting as wide a net as possible, Zuckerberg is boldly attempting to not just be the most popular destination online, but to be every destination online. While ambitious, it’s a brass ring that other companies—and even Facebook—have fallen on their face trying to grab.

To encapsulate all that is wrong with this post-adolescent phase of Facebook, look no further than perhaps the least consequential feature unveiled Wednesday: the “On This Day” app. The feature allows users to see what they and their friends were posting about on that particular day, however many years ago they’d like. It’s the sort of fun, simple nostalgia that will crowd your News Feed until the last person realizes how formulaic and gimmicky it is. A similar app, Time Hop, has gained modest traction with 6 million active users. Time Hop CEO Jonathan Wegener spoke to Facebook’s all-encompassing nature when he told TechCrunch, “If Facebook isn’t playing in your space, you’re probably not doing something worth doing.”

Watching Mark Zuckerberg at Facebook’s F8 developer conference often felt like watching someone throw pasta at a wall to see if its done.

But “On This Day” represents a real problem for Facebook when held against its nearest competitors, Twitter and Snapchat in particular. These two companies have provided services with vaguely similar appeal to that of live television: Constantly be aware of what’s going on in society (or just among your friends) or you might miss it out on the next big thing. They are both swiftly moving atmospheres that hedge themselves on the brevity and high-demand of an event over its longevity.

Facebook, in comparison, is building itself primarily as a ecosphere for all content instead of a social media company. Facebook is hoping to amass a massively large collection of original content, be it your aunt’s vacation photos or, as Facebook also unveiled this week, exclusive content from the likes of BuzzFeed and the New York Times. In most ways, Facebook succeeds at this mission; you’re likely to find something interesting surfing through your News Feed if you’ve managed it well. But it also means Facebook is setting itself as something rather separate from where the rest of social media is heading.

Which brings us back to its “On This Day” app. Facebook is absolutely the best, most informative and well-organized photo album in the history of man. But much of what it’s competitors are aiming to do is live in the present, not the past. After squashing Meerkat’s ability to use its social graph, Twitter, for example, just unveiled Periscope, its own livestreaming app. Back in January, Snapchat made a move for original content with Discover, retaining its goal of being a content provider while never abandoning the “ephemeral media” schtick that has made it so popular.

What’s odd is that Facebook knows this. Its war against Twitter to be the ultimate “second screen” to live events is quite well-documented and has forced both Facebook and Twitter to fundamentally alter how their sites are run, frequently appearing to copy one another: Twitter began a possible road to curated feeds with a “While You Were Away” function and Facebook reluctantly added a “Trending Topics” section. The push to make Messenger a standalone app is a direct jab at the growing messaging app market that includes Kik, Snapchat, and even WhatsApp, the 55-person company Facebook purchased for $15 billion last year.

The continued existence of WhatsApp in the face of Messenger’s new status actually displays a major point about Zuckerberg’s philosophy when it comes to acquisitions. When Facebook purchased Instagram for a paltry $1 billion in 2013, it was easy to question why the top photo sharing site on the Internet would buy its nearest competitor. Instead of simply removing a foe, though, the purchase enabled Facebook to obtain the data of Instagram users and improve both platforms. One can bet WhatsApp has a similar role within Facebook.

But this wide selection of competitors can stretch Facebook to the point of only holding on to the crown it already owns. Although other Silicon Valley giants like Google and Amazon have also attempted to stretch themselves across all nature of mediums, they’ve typically failed when going too far to be like everyone else. Amazon unveiled its Fire Phone in a direct shot at Apple and Google’s Android, but the product largely flopped for not offering all that much that was new (and being an absolute nightmare to privacy activists). Google watched its Facebook competitor Google+ officially go belly-up earlier this month, quickly trying to salvage Google Photos from the wreckage.

Facebook already knows these kinds of failures quite well. Last summer, Facebook revamped its Snapchat clone in the form of Slingshot, an app that lets you send self-destructing photos to friends. Despite positive reviews, the app has struggled to catch on with users, quickly losing popularity after its release. A year before that, Facebook unveiled Poke, another Snapchat clone that similarly fizzled; it was removed from the App store last May. And before that was Paper, another well-reviewed app that has largely disappeared.

It’s these lessons Facebook seems to be forgetting. Attempts to be like others have generally not gone well for the company, especially when copying the models of services that are already quite popular. After all, the same company that this week unveiled Messenger as a way for businesses to interact and promote themselves also spent $2 billion on a virtual reality company last year. This need to be the place where people find content, share content, and talk about content in the same way they already do that on other sites is too crazed a message for one brand to carry.

Driving after so many competitors at once is dividing Facebook into a search engine, a messaging app, a content provider, a virtual reality content provider, and even a payment system. However, it may be too late for a company mostly associated with cat videos to validate itself in the ways Zuckerberg seems to want. The company even seems driven to replace email, a race that is already pretty crowded. But unless Zuckerberg can tie these ribbons together in a meaningful narrative for users to understand, Facebook risks becoming a behemoth of a hundred features no one uses and one feature they actually do use.