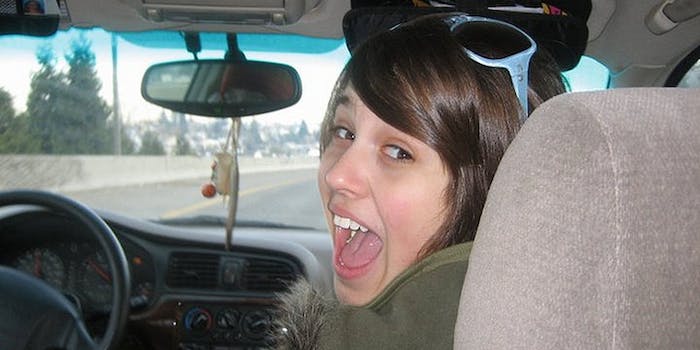 When Jenna Ness died her friends immediately flocked to her Facebook profile. This is a story about life, death and mourning in the digital age.

On Aug. 9, 2011, Kylie Minogue purchased a cake for her friend’s birthday. Atop the German chocolate, a baker had scrawled “Happy Birthday Jenna” in bright blue frosting. After Kylie—no relation to the Australian singer—picked up the cake from the store, she took it home and shared some with her roommates.

But before they cut into it, Kylie took a picture to post on Jenna’s Facebook profile, since she couldn’t be there.

Jenna has never seen that picture. She died before it was posted.

More than 750 million people worldwide are on Facebook and, by some estimates, more than five million of them are dead.

Since Facebook’s creation in 2004, the question of how to address death has become increasingly awkward for the social media giant.

The problem emerged when the site launched a new feature that suggested people to reconnect with, according to a Time Magazine article published in October 2009.  Within days, users were complaining that friends who had died were appearing on the application and the site quickly noted its policy of memorializing the profiles of deceased users.

A profile can only be memorialized when Facebook has received legal proof of death, said Facebook spokesman Fred Wolens. Once the death has been confirmed, only those who were friends with the person prior to death can see the profile or post messages.
The effect: the page becomes a digital tombstone.

The life and death of Jenna Ness

Kylie Minogue first met Jenna Ness during their junior year of high school in the Fall of 2005 and the two became fast friends. They would remain close through high school and college, when they both attended the University of Montana in Missoula.

A few weeks after the spring semester of their junior year ended, on the night of June 27, 2010, Kylie, Jenna and a group of friends were celebrating a pair of twenty-first birthdays. At about 1 a.m., the group arrived at The Rhinoceros bar for a final round of drinks. Inside, they got a pitcher and some pint glasses and headed out back where a bench sat against a brick wall. When Jenna walked outside, something caught her eye.

“Who wants to climb that fire escape?” she asked.

Then she did. Most of the group was too preoccupied to notice, and those who did knew it was Jenna being herself, always the outgoing and adventurous one of the group. While it had been a few hours since Jenna had anything to drink, Kylie, the self-appointed mother of the group, was still concerned.

“Jenna, we’re going to have to call the fire department to get you down,” Kylie said, as she walked toward her friend, who was now climbing a flight of stairs. “Jenna this is a terrible idea!” she recalled saying.

But Jenna didn’t respond to Kylie’s warnings. She climbed over the railing and started to shuffle across a brick ledge, about 25 feet in the air. Jenna approached the end of the brick overhang and lifted her foot across the gap to an adjoining ledge. As she tried to push her other leg over she slipped. She fell backward and tried to grab on to the ledge that had been holding her seconds earlier. She couldn’t. She fell, hitting an air conditioner before falling another dozen feet, hitting the ground face-first.

As Jenna laid there in the back ally, Kylie ran toward her and knelt beside her still body. Kylie reached for her friend’s side and turned her over. Blood ran down her fingers.

“Call 911!” Kylie screamed into the darkness.

A year later it can still be hard for Kylie to talk about Jenna and the night she died.

“Her life—I mean she lived it as if it were a romantic comedy,” Kylie said, running her hand underneath her sunglasses to wipe away a tear. “All the weird, quirky things that happen in a movie … well Jenna made it happen.”

After Jenna fell, she was brought to the hospital where she lingered for 36 hours. She died on the afternoon of June 29. Within hours, the family began to make final arrangements for a memorial and friends started to send their condolences.

They also started flooding Jenna’s Facebook profile with messages of love and loss. Because Jenna was cremated, for some friends the page took the place of a physical memorial.
One friend wrote:

“I can still hear your laugh Jenna. Thanks for bringing happiness to everyone around you. You will never be forgotten.”

“Jenna —You filled every second of our time together with love, beauty, truth, kindness, compassion and brilliance. I am a better person for being your father.”

Some of her friends couldn’t look at her profile at first. It was just too painful.

Seeing Jenna’s own posts—the ones she made while alive— as well as her  friendships was especially tough. There were messages from friends and even new pictures where she was tagged.

“People’s Facebook (profiles) are just so personal,” Kylie said. “Even if your posts or status updates are cheesy and corny, they reflect who you are as a person.”

In time, both Gina and Kylie logged back on.

At first, both girls only read what others had to say — “It’s cool to see that it’s not just you who is thinking about her,” Gina said. But soon they were posting pictures and notes. After a few months, Kylie found herself visiting Jenna’s page a few times a week, although more than a year later the visits have become less frequent.

“It made me feel better,” Kylie said.

Kylie was always sure to keep her notes positive, not wanting Jenna’s Facebook wall to become a depressing place for others. But there were a few occasions, when the memories of what happened in the alley were too raw, that she sent Jenna a direct message on Facebook. Kylie called it a “release” between the two of them.

Writing to the dead helps

Writing letters to the dead can actually be therapeutic, said Krissa Kirby, a psychologist in Havre, Mont., who focuses on young people dealing with loss.

“I think it works because they are extracting feelings they have. They are getting those feelings out,” she said. “(And) it keeps them connected to this person.”

In some ways posting on someone’s Facebook wall today, is what writing a letter was in the past, she said. However, there is a downside.

Unlike a letter, locked away in an envelope or shoebox, a post on a Facebook wall is public and can solicit comments or opinions—welcomed or not. That could lead to some awkward situations, with other people reading posts and being hurt because they think it is inappropriate.

But little is known about grieving online or the Internet’s effect on well-being in general, Kirby said. The few studies that have been done have had mixed or incomplete results.

So far the most relevant results come from a 2010 study specifically on grieving online conducted in the wake of the Virginia Tech shootings. It found that the Internet didn’t have any negative or positive psychological effects on mourners.

However mourners did report that visiting Facebook as part of the mourning process made them feel better, reported study author Amanda Vicary,  an assistant professor in the psychology department at Illinois Wesleyan University.

“People’s lives are wrapped up in social media,” she said. “Even people’s romantic lives happen online, so what’s the difference when someone dies?”

Some companies are now banking on the fact that people’s lives are so wrapped up online, that they now plan for their ‘digital’ death. Jesse Davis co-founded the website Entrustet.com, which helps people distribute usernames and passwords to friends or family so they can take care of someone’s digital persona after they’ve passed.

Davis wouldn’t say how many people are using the service, and so far, no one who has signed up has died. Entrustet offers more than the ability to access a deceased person’s email or Facebook. As more people do their finances online, giving someone access to those accounts after they’ve passed will be crucial. But there are also more personal reasons.

“Every photo I have is stored in a cloud somewhere on Facebook or email. Every note to my girlfriend too,” he said. “It’s all stored (online); it’s not local anymore.

Today most of the pictures Kylie has of Jenna are on Facebook; pictures of late night hikes, long road trips and adventures downtown. On the anniversary of Jenna’s death, Kylie found some old photos and posted them on her profile, joining the dozens of other images and memories that serve as an everlasting memorial to her friend, and the closest thing she has left.

“It will always be her profile,” Kylie said. “I mean she created it and it was her way of showing people who she was. It represents her more than anything else.”

And a few weeks after the anniversary, those images and memories where joined by another: a German chocolate cake with bright blue frosting. Kylie said posting the picture of the cake to Facebook was her way of remembering and she joked that Jenna would see the picture on “afterlife Facebook.”