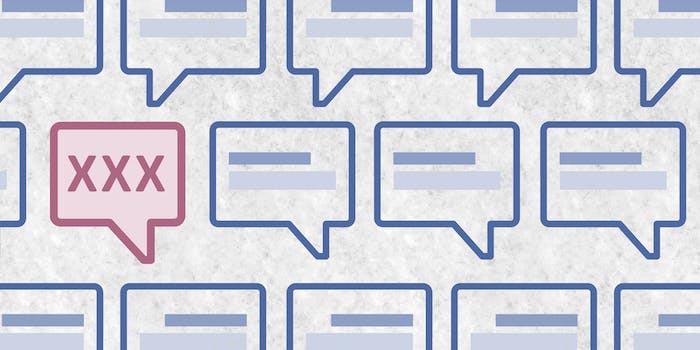 If only she'd used Snapchat.

It’s a question as old as the Internet itself: iI you’re married, and you get sexy with someone else through Facebook, is it technically cheating?

A court affirmed on Tuesday that it kinda-sorta is, and allowed dad Shannon Borden to retain custody over his two sons with his former wife, Mary Jane.

It’s the latest step in a tug of war between the Tennessee couple, who split in 2010. Mary Jane originally took custody after accusing Shannon of molesting their children, though a subsequent investigation found no evidence of abuse. But Shannon found that he could position himself better in their divorce proceedings if he could show that Mary Jane had cheated on him with two former high school classmates.

And what better way to show that, than simply looking through undeleted Facebook chat records?

Though Mary Jane was tagged with the men in 2009 Facebook photos, and admitted meeting up with them in real life, she told the court that the only place she’d only been sexual with them was on Facebook.

To that end, the court saw 75 pages of chats between her and the men, which Judge Larry Roberts described as “quite explicit.” (The State of Mississippi Judiciary, which heard the case, doesn’t have the text of the sexy chats in its online database, and Shannon’s lawyer didn’t immediately respond to a request for them.)

On Tuesday, the Mississippi Court of Appeals found that the previous court had made its decision largely based on the illicit chats. “It is clear from the chancellor’s opinion that Mary Jane’s inappropriate communications with [the two men] caused her to be denied custody of her two children,” Roberts wrote.

But that lower court was within its rights to consider the online infidelity as a factor, the Court of Appeals found, and Shannon’s custody of the kids stood.

So let that be a lesson: If you’re planning on having a virtual affair with old high school buddies, and want to keep custody of your kids, be sure to use Snapchat.