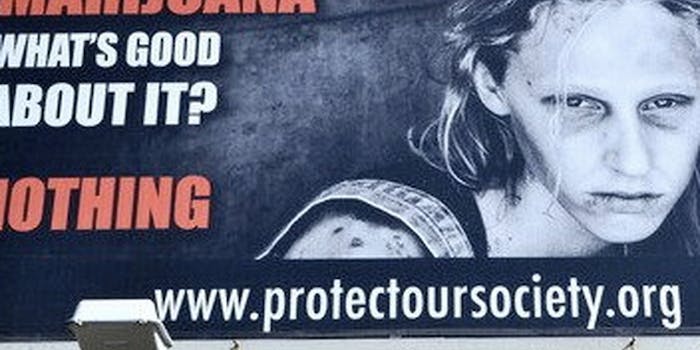 A Facebook protest convinced Clear Channel to remove the Portland, Ore. ad, paid for by a mysterious organization.

There’s some question over who exactly is behind the dishonest anti-marijuana ad which appeared on a billboard at the corner of 122nd and Division streets in Portland, Ore. two weeks ago—and that mystery is part of the reason why pro-legalization activists found success in their Facebook campaign to convince billboard owner Clear Channel to take the ad down.

The issue of marijuana legalization is particularly contentious in Oregon these days, because it’s one of three U.S. states where residents will vote on the issue this November. Oregon’s Measure 80 would, at the state level, end marijuana prohibition and grant cannabis a legal status similar to that of alcohol: legal, but limited to adults 21 and over, with special taxes and restrictions on its sale and production.

The billboards (presumably opposing Measure 80, though making no mention of the bill), show a stark, black-and-white photo of a hollow-faced young woman with bruises under her eyes, and the slogan “Marijuana. What’s Good About It? Nothing.”

The Portland Mercury blog pointed out that the ad “pissed off marijuana advocates because… um… that’s clearly not a photo of someone who’s high on pot. Maybe they’ve spiked their mountain of meth with an appetizer of hash. Also, there’s a lot that’s good about pot, if you’re someone who’s dealing with chronic pain—that’s why it’s already legal for medical use.”

The billboard also included the web address of an anti-marijuana group calling itself Protect Our Society. The POS site offers no specific information regarding who’s behind the group; it only makes the vague boast, “Our members include doctors, researchers, law enforcement officials, business leaders, lawyers, and parents, just to name a few.”

Though it doesn’t actually name any of its members. It does, however, list many frightening anti-marijuana claims of dubious authenticity, most lifted from DEA or ONDCP publications.

So a group of legalization activists started a Facebook page urging people to “Protest the Billboard at 122nd & Division!” and noted that the photo “does NOT represent cannabis users! This billboard is in Portland, Oregon, a city with nearly 10,000 LEGAL Medical Marijuana patients. There is no scientific evidence to back this claim but there is a LOT to disprove it, STARTING with the fact that it saves lives…. This is discriminating against sick people for the medicine that CURES them.”

Another anti-prohibition group, Oregonians for Law Reform, made an Oct. 10 appeal on its own Facebook page: “Please help Oregonians for Law Reform call out Protect Our Society, and these billboards for what they are. A desperate attempt to scare voters into continuing prohibition that has caused more harm to our society than the drug it was intended to protect us against.”

“The ads protesting marijuana are being removed because our policy is transparency of advertising campaigns and the advertisers who are sponsoring them,” a Clear Channel executive said in a prepared statement. “These ads include a misleading website that we believe needed to honestly represent the advertiser so the ads are being removed.”

Protect Our Society has made no statements regarding the controversies over its billboard, its website claims, or its lack of transparency.

Photo via Protest the Billboard at 122nd & Division!/Facebook