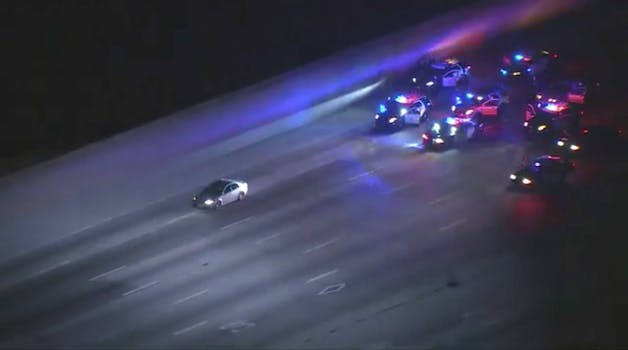 O.J. Simpson has nothing on this low-speed Facebook Live police chase

If you tracked that white Ford Bronco years ago, this video is for you.

Two may not be enough to qualify as a trend—especially 22 years apart—but it appears that the Los Angeles Police Department has a knack for making low-speed police chases go viral.

While O.J. Simpson’s 1994 chase had star power, last night’s 90-minute escapade to apprehend a suspect wanted for attempted murder had a much better flair for the dramatic, with 4 million people eventually tuning in to Facebook Live to watch it go down.

The suspect, Marco Tulio Flores, was wanted by police for the shooting of his sister-in-law, who is currently in critical condition. But the event begins where most of these car chases typically end, with the suspect’s car stopped, and the suspect slowly leaving the vehicle, surrounded by police.

Instead of surrendering, Flores gets back in his car and peels away. This scenario repeats it several times over the first 15 minutes. Skip ahead to any point and you’ll find him stopped, with his hands out the window, seemingly on the verge of giving up, before hitting the gas again.

The chase continues for a full 90 minutes. Other highlights include: at the 28-minute mark, the suspect firing a gun into the ground and the LAPD returning fire; Flores, at the 35:30 mark, baiting the LAPD to get out of their cars by stopping, then speeding away and tossing a jacket out the window; at the 43-minute mark, Flores driving while having both hands and his head out the window; and at the one hour and 27-minute mark, the dramatic conclusion, which features several initial failed attempts at PIT maneuvers by the police, before Flores is eventually taken down by a police dog.

Flores has not been charged as of this posting.