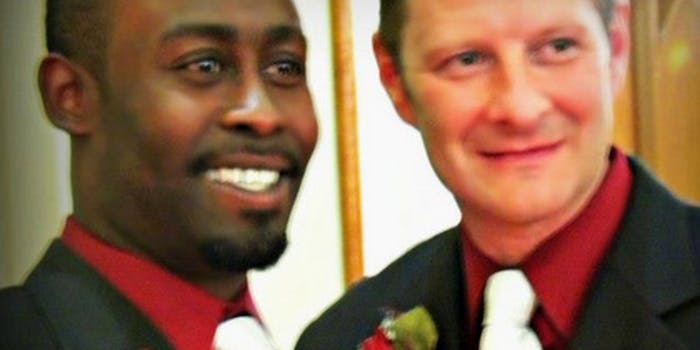 Murray Lipp, founder of the Gay Marriage USA Facebook group, keeps getting banned. Facebook apologized, but it can't do much to stop it.

Facebook apologized for mistakenly blocking the founder of a pro-gay-marriage page. What triggered the ban? A picture of a mixed-race same-sex couple, which a Facebook user flagged as offensive.

Murray Lipp, the owner of Gay Marriage USA, was notified by Facebook the picture received several complaints and that he would be banned from posting to the page’s 300,000 followers for a week.

Facebook administrators said Lipp was in violation of the site’s “policies and community standards.” The ban lasted a day after Lipp alerted Facebook he was being trolled by homophobic critics.

The targeted photo was of a Chicago bishop and his black husband. After commenters wrote several homophobic comments, calling gays “disgusting and completely vile,” it was taken down.

Lipp told the Guardian that he’s been unfairly reprimanded by Facebook several times over the past few years from homophobic users and he’s getting fed up with the service.

“Not once has Facebook ever contacted me to give me an opportunity to respond—it simply blocks me each time and each time the block is for a longer period of time. It’s totally unjust that I should be punished for someone else’s homophobia,” said Lipp.

Facebook told the U.K.-based newspaper that the page was removed “in error” and the picture did not violate its terms.

“Normally these comments are reviewed separately and removed where appropriate. In this instance the photograph itself was mistakenly taken down, despite there being nothing in the picture that breaks our rules,” the spokesman said. It receives thousands of complaints a day and sometimes mistakes are made, they added.

In an interview with the Daily Dot in November, Lipp said he tries to provide a safe haven for allies and gay people and said GMUSA’s purpose was to encourage enthusiasm about same-sex marriage.