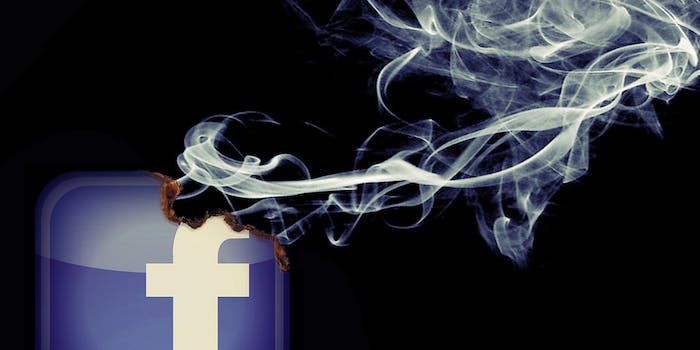 This is not the way to handle rejection.

Getting used to the word “no” is an important part of being an adult—a lesson that seems to have blown past one Kentucky man allegedly responsible for a bizarre and wildly out-of-proportion response to Facebook rejection.

Frankfort, Ky., resident James Graham, 37, allegedly broke into Joanie Yount’s home on Thanksgiving Day and set it on fire after she rejected his Facebook friend request.

Robert Warfel of the Frankfort Police told local news station WLKY that Graham was a bit of a creeper. He reportedly commented on Yount’s photos and sent several friend requests. Young, Warfel said, “rebuffed those, and it’s kind of what set this all in motion.”

Yount is a single mother who “doesn’t want a relationship,” according to her sister Samantha Beagle. But for the apparently socially deficient amateur arsonist, that wasn’t good enough. Graham allegedly needed her to understand what it felt like to despair—and is accused of doing so by fighting Facebook with fire, breaking into her house, setting a box near her bed ablaze, and running away.

Graham has yet to be arrested, but his bail will be set at $50,000. Perhaps his family could raise the bail money through a Facebook Page.