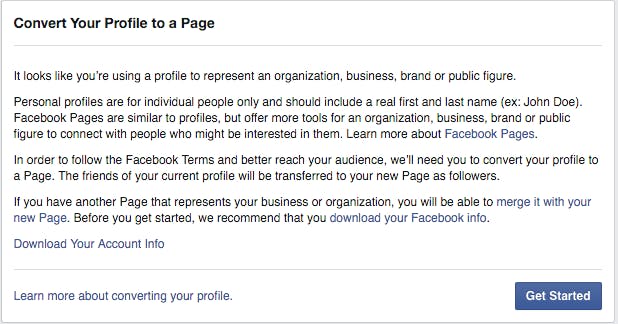 9:00am, Thursday: Nope, it’s not a joke. Someone’s messing with me hard. The question is, who? Who did I piss off enough to jump through the hoops necessary to get my account suspended?

I can only think of one… maybe two… OK, three dozen people at most who needed to be told they’re wrong this week.

Gotta give it to them, though; going the public figure/business page route is genius. Nothing I’ve written anywhere warrants a ban, so flooding them with false claims about the nature of my account is a very effective way to get the job done.

9:30am, Thursday: The Facebook appeals process requires proof of identity. That seems reasonable, but when I upload precisely the proof they ask for: 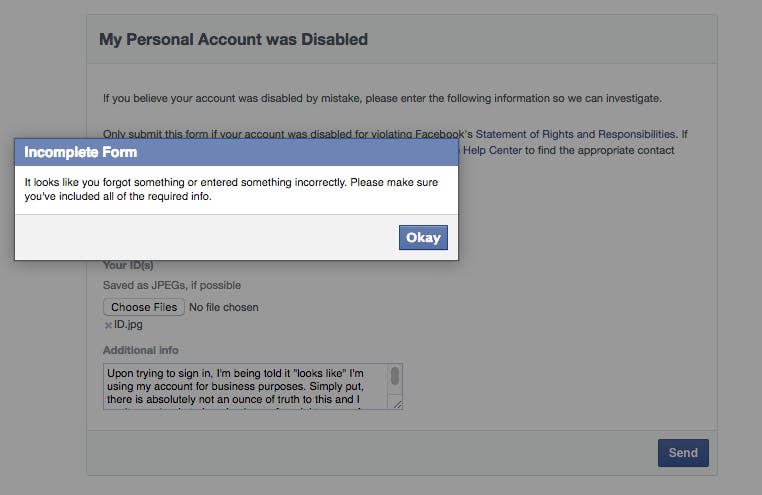 I don’t know. Maybe it’s just me, but it seems that Facebook shouldn’t be telling me I didn’t upload an ID file when its own form is listing the ID file I just uploaded. Must be one of those coder things I don’t understand.

So, how exactly do I go about getting Facebook to recognize the ID I uploaded? Are there arcane secrets I’m missing? Special passwords? Secret handshakes? An ancient Sumerian initiation ceremony with four goats and an old guy named Edgar? Maybe a never-to-be-spoken-of one night stand at the GOP Planning Committee’s annual members only after party?

I feel so out of touch.

10:00am, Thursday: 12 hours without my Facebook feed. Everyone on my friends list must be frantic by now.

3:00pm, Thursday: Where did I go online before Facebook? I remember the hours flying by before I ever heard of Mark Zuckerberg. What was so interesting back then? AOL? Myspace? No, that can’t be it…

5:30pm, Thursday: Making dinner. Spent the afternoon cleaning the house. Maybe I’ll pull out my guitar after the dog’s next walk. It’s been what… a year? 8:00am, Friday: Still no Facebook access, and still no response to queries. Yes, I know it’s free, but this is NOT what I consider good customer service.

Time to walk and feed the dog.

Started Codecademy Python course. When did I first promise myself I’d learn to code? Was it really 2004?

3:00pm, Friday: Talked to Mom. She’s still the one person on Earth who can make me question my sanity in less than three minutes.

6:00pm, Friday: Girlfriend emailed a friend who has a friend whose sister’s boyfriend works at Facebook. Fingers crossed.

7:00pm, Friday: Practiced Kung Fu forms for the first time in over five years. Damn, I’m out of shape! Maybe I should head over to Reddit and see if there are any good non-commercial groups practicing in the area?

Note to self: Don’t feed the Reddit trolls — they’re the worst.

10:00am, Saturday: We took the dog to the park, let him run around like an idiot, and then worked on his recall for about 45 minutes. Once he gets used to a new treat, it doesn’t seem to hold as much value for him. Maybe we should buy chicken jerky and only use it for training.

He got to play “Wag Wag… Punch You In The Face!” with Barney the German Shepherd before we left. He smiled the whole way home.

1:00pm, Saturday: Reading a book on social media analytics that’s been sitting on my shelf for a few years. I’ve always known that companies like Facebook make their money by selling data, but once you start grasping just how deeply they’re digging, just how much they learn about you, and just how far beyond simple marketing it goes… Well, it’s impressive, but more than a little frightening.

Note to self: Look into PHP after completing Python course.

5:00pm, Saturday: Still no access. In more than a few of the forums I’ve stumbled across trying to find a solution, commenters write that it’s not uncommon for it to take several days or weeks before Facebook even responds. Seriously?

The more I think about Facebook’s abysmally shitty customer service, the more it’s becoming apparent that being a Facebook user isn’t necessarily the same thing as being a Facebook customer.

9:00pm, Saturday: Broke down and paid the $20 Comcast wants to “purchase” The Force Awakens. Screw it! It’s Star Wars! We all know I’m gonna shell out another $20 for the Blu-ray, but I want to see it again right now, dammit!

Is it weird that I’m in my forties and still want a real lightsaber? Zuckerberg probably has someone working on one for him right this minute. What an asshole.

5:00pm, Sunday: Ordering Arduinos! I may not be able to build a real lightsaber, but I can design and build game peripherals! Most of what’s out there is crap or too damn expensive (you know who you are!), and with the new flight and space sims coming out, I need something that I’ll actually want to use!

Not that it’s going to be easy… Glad I started to learn coding!

9:00pm, Sunday: When I first studied Buddhism, what appealed to me was the belief that, in order to be at peace, you first need to become aware of what’s been right in front of you all along. The next step is accepting that once you see something as it truly is, you can’t go back to seeing it in any other way.

Too “spiritual”? Too hokey? Too off-point? OK, then let’s just go with what people smarter than I’ll ever be have been saying for years:

“If you’re not paying for it, you’re not the customer; you’re the product being sold.”

This… so much, this.

Facebook doesn’t care about me (or you), or the fact that my account never should have been disabled. I’m just one tiny data set among 1.65 billion, and they’ll get to me when they get to me… or they won’t. Either way, Mark will still have his $10 million mansion by Dolores Park.

7:00pm, Monday: Spent all day learning Fusion 360. (It’s just amazing what that software can do.) Came up with a few prototype design ideas and now I need to find a 3D printer to rent or borrow. I think I’ll want to go mostly with cast aluminum parts eventually, but plastic should do for proof of concept.

Am I onto something here? I don’t know, but I’d forgotten how happy I am when I’m trying to create something. It’s like I’m playing with alien Legos for adults!

4:00pm, Thursday: Back to Fusion 360. Spent the past two days 3D printing and the first batch of prototypes work, but the designs are going to need some careful refinements before I’m ready to send them off to the tooling service.

2:30pm, Friday: Facebook finally responded. I’ll open the email and see what they have to say later. Right now I might—just might—have a patentable idea and I need to work through it and get it down before I forget it.

But first, the dog and I are going out to find his pal Barney. Dog punches wait for no one.

A grumpy New York transplant and old-school telecom guy living in the Pacific northwest, Jason has been pushing bits and bytes over wires and fibers for more than 20 years. He decided he was done with New York when CBGB’s closed its doors, but has a dozen Brooklyn bagels flown in once a month because nothing else cuts it. He’s jealous that his dog Faulkner has more Twitter followers than he does.