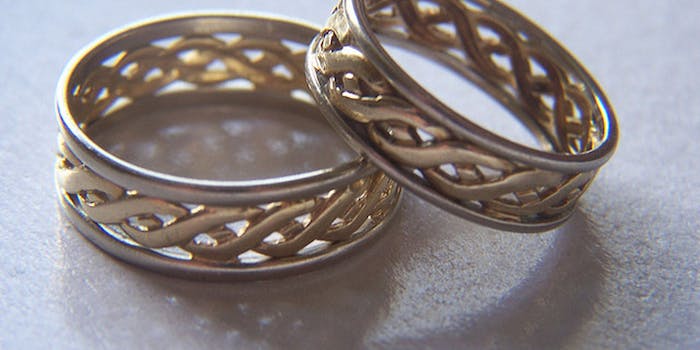 Alan O’Neill, a 42-year-old corrections officer from Piece County, Wash. was arrested in March 2012 after Ellenora Fulk, his first wife, discovered the existence of a second bride on Facebook.

The Facebook feature “people you may know” suggested that Fulk become friends with a woman named Teri Wyatt-O’Neill. Fulk did not know who she was but noticed that the man in the woman’s profile picture was her estranged husband. The picture showed the two standing next to a wedding cake.

Fulk notified the local authorities, and O’Neill was subsequently arrested.

On Thursday,O’Neill pleaded guilty to one count of bigamy. Superior Court Judge Beverly Grant gave him a suspended sentence and placed him in probation for one year.

According to Philip Thornton, attorney for the defendant, his client did not mean to have multiple wives. Thornton told Judge Grant that O’Neill had asked a neighbor to file divorce papers on his behalf but that the neighbor never followed through.

“He just made a bad decision that hurt a few people’s feelings and (brought) embarrassment to himself, she wrote, according to The Olympian.

Since the incident, O’Neill has had his second marriage annulled and is in the process of divorcing his Fulk.

This isn’t the first time that Facebook has played a prominent role in exposing a bigamist. Richard Barton of Grand Rapids, Mich. was arrested and charged for bigamy in March 2011 after his first wife became aware of his second second wife via the social network.