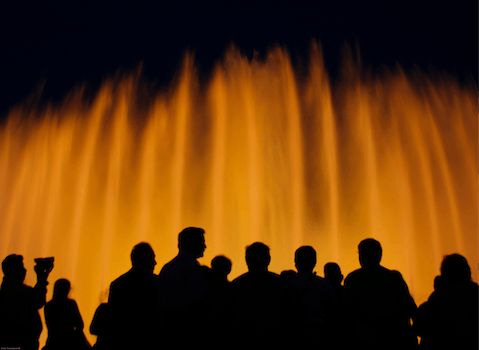 Your Facebook audience is bigger than you think, study finds

Numbers of likes and comments can be deceiving. Your friends are probably reading your Facebook posts, even if they're not responding.

Hey, Facebook users: do you ever feel discouraged by the paltry few likes or comments your posts tend to get? Do you wonder if maybe your friends just aren’t seeing your posts, possibly due to an annoying side effect of the latest Facebook changes du jour?

Researchers at Stanford University say your Facebook postings reach a much larger audience than you think. In a study called Quantifying the Invisible Audience in Social Networks (released online as a 10-page .pdf document) researchers ask:

“When you share content in an online social network, who is listening? Users have scarce information about who actually sees their content, making their audience seem invisible and difficult to estimate [….] we find that social media users consistently underestimate their audience size for their posts, guessing that their audience is just 27% of its true size.

“Qualitative coding of survey responses reveals folk theories that attempt to reverse-engineer audience size using feedback and friend count, though none of these approaches are particularly accurate.

In other words: the actual number of people who see your Facebook posts is almost four times larger than you think! And you probably think the number of likes and comments you get reflects the actual size of your audience—but you’re wrong.

Assuming the study is accurate, of course. How exactly did the researchers reach their  conclusions? Facebook gave them visitor data on 220,000 accounts, to compare the number of people who saw a post with the number who “liked” or commented upon it, and concluded that on average, about 61 percent of your Facebook friends see your posts over the course of a given month (though they may not be giving you any feedback, in the form of comments or likes).

Why does any of this matter? Because of human nature; whether we intend to or not, what we write or post is affected by our audience and what they think of it—more specifically, by what we think our audience thinks. As the study says:

“Correct or not, these audience estimates are central to media behavior: perceptions of our audience deeply impact what we say and how we say it. We act in ways that guide the impression our audience develops of us [….] Social media users create a mental model of their imagined audience, then use that model to guide their activities on the site.”

But chances are your mental model is wrong, where the size and makeup of your Facebook audience is concerned.

The study explains that most Facebook content comes from the news feed, where you see photos, links, updates and other postings from your friends. When you post something, Facebook distributes it to your friends, and “the feed algorithmically ranks content … based on a number of optimization criteria, including the estimated likelihood that that the viewer will interact with the content.” So not all of your friends see your posts, and chances are you’re not seeing some of your friends’ posts either.

Even if a post does appear on a news feed, that doesn’t necessarily mean the user read it. How did researchers determine that people actually looked at a post in a feed, rather than scroll right past it? The study says “To determine audience size, we used client-side instrumentation that logs an event when a feed item remains in the active viewport for at least 900 milliseconds.”

So if someone’s scrolling down through their Facebook feed and lingers on a post for nine-tenths of a second, that’s—significant? Not necessarily:

“[B]eing in the audience does not guarantee that a user actually attends to a post: according to eyetracking studies, users remember 69% of posts they see.”

The study continues for several pages more, asking Facebook users about their perceived audience and comparing the answers to the users’ actual visitor data (which ordinary Facebook users cannot see), and it reaches a potentially unflattering conclusion:

“Why do people underestimate their audience size in social media? [….] A necessary consequence of users underestimating their audience is that they must be overestimating the probability that each audience member will choose to like or comment on the post. For those posts without feedback, it might be more comfortable to believe that nobody saw it than to believe that many saw it but nobody liked it.”

“Some Facebook groups now display how many group members have seen each post, while sites such as OkCupid show who has browsed your profile. Adding audience information could certainly address the current mismatch between perceived and actual audience size.

The study goes on to note, with great understatement:

“Our results do not paint a clear picture as to whether audience information would be a good addition. Some measure of social translucence and plausible deniability seems helpful: audience members might not want to admit they saw each piece of content, and sharers might be disappointed to know that many people saw the post but nobody commented or ‘Liked’ it.”

So yes: chances are your posts reach a wider audience than you think, and stay in your friends’ range of awareness for at least nine-tenths of a second; it’s just that nothing they saw during those 900 milliseconds inspired them to leave you any feedback.