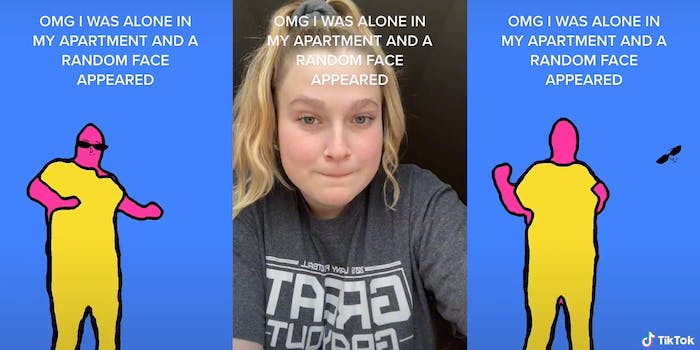 Did this TikToker just discover a ghost in her apartment while using a facial recognition filter? OK, probably not. But the results are still seriously creepy.

TikToker Abby Houser (@abbyjhouser) was filming a dance clip when it happened, using a filter to turn her body into a cartoon outline with stylized sunglasses for a face. Then, partway through the video, the “face” shifts to a different part of the room as if there’s a second, invisible person hiding in the corner.

The resulting TikTok is captioned “OMG I WAS ALONE IN MY APARTMENT AND A RANDOM FACE APPEARED,” going viral with 4.6 million views in a little over a week. Most of the responses are jokes about a ghost lurking in the background. After all, there’s nothing visible that even remotely resembles a face.

“the ghost literally said ‘dont mind me, just watching,'” one comment reads. “hes like I haven’t been able to wear shades in a while,” another joked.

The face may just be the result of a glitch. But one response had a more cynical explanation: “That was definitely your boyfriend lol.” After all, the disembodied face does just appear on one side of the screen, as if a person is leaning into the frame.

This haunted filter effect was used in a real horror movie already: The Zoom-based film Host, which was filmed via video chat and earned positive reviews during the early months of the pandemic. It includes a scene in which a girl believes she’s alone in a room… but notices a disembodied “mask” hanging in the air when she uses a facial recognition filter. It’s a genuinely scary moment!

The Daily Dot has reached out to Houser via TikTok comment.