Give me my goddamn echo chamber already

Neutrality is for a**holes. We need a feminist-only social network.

So, Ello’s gone, right? That’s over? ’Oodbye and ’ood luck? It shone bright and flamed out fast, and I can’t say I’m surprised. I never actually got around to signing up for Ello during the Great Symbolic Drag Queen and General Privacy Rights Temporary Exodus of 2014—not because I wasn’t on that side of the issue (scah-rew yew for many reasons, Facebook), but because Ello was so clearly not going to happen.

The cultural slide from one social network into another—that moment when you can’t remember why you ever used a site that once felt vital—is a massive, glacial sea change that really can’t be forced. Do you remember when Friendster gave way to Myspace? It wasn’t because Myspace had a better street team or Friendster had a major PR snafu or that we all decided, collectively, to make the move. Myspace just found a need and filled it. One moment Friendster was the thing you needed and the next it wasn’t. (It’s since been so completely obliterated by Facebook and Twitter that I can’t even remember what that need was. HTML? Tila Tequila?) Once enough people have that need fulfilled, going back is inconceivable.

Ello wasn’t the thing we needed this time. But there is a need growing, and there is a sea change coming, and Facebook and Twitter are going to render themselves obsolete if they don’t get ahead of it.

The need is safety, and the sea change is social justice.

As a person who is ceaselessly abused and harassed via social media but who needs to use it for my job (and because I have as much of a right to use these spaces as the people who hate me), I get a lot of lectures about the importance of neutrality. Neutrality is inherently positive, I’m told—if we start banning trolls and shutting down harassment, we’ll all lose our jobs. Trolls are just a natural part of the Internet! And you can’t run a successful Internet company without the Internet! (If anyone has any numbers that prove that trolls = jobs, please send them my way. I’ve been waiting for a decade.) Plus, it’s a lot of work to protect the users who make our company profitable. Plus, moderating comments and actively banning oppressive speech is itself oppressive, because all opinions matter and everyone deserves to be heard. Reverse racism is just as bad as regular racism! Plus, I GOT SAND ON MY BINKY.

No. Neutrality is a pleasant concept, I guess, but neutrality isn’t neutral in situations—such as, say, all of Earth circa 3,000 B.C. to 2014 A.D.—when someone’s already getting the short end of the stick, when certain groups are being disproportionately targeted for silencing and harassment. Neutrality just perpetuates those imbalances. It’s a smokescreen. I don’t want to give all ideas equal credence forever, because there is a difference between different kinds of ideas.

I don’t want to pretend like misogyny, overt or covert, is a legitimate counterpoint to women simply existing—that “offensive humor” memes of women’s battered corpses deserve a home on Facebook because they also allow mommy bloggers to trade recipes or whatever. Not all opinions have merit, and not all ideas are just “different”—some are actively destructive, if not deadly, and unworthy of mainstream validation. And we, as people (and private companies), get to decide which ones we support.

Fuck neutrality. I want to win the culture wars. 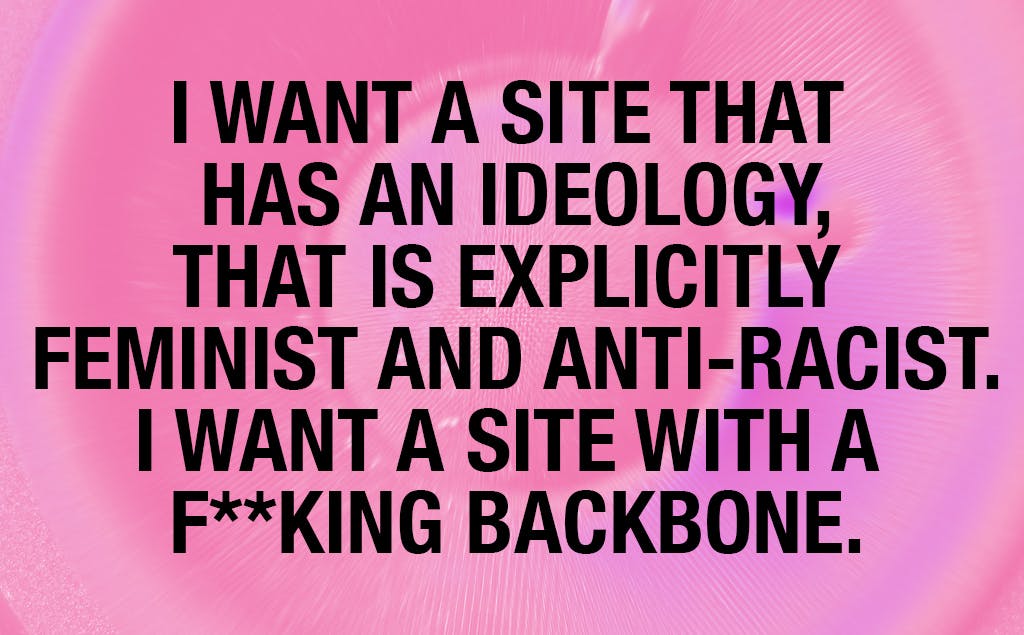 The brief reign of Ello got me thinking: If I could design the next big social network from the ground up, what would it look like? Beyond all the obvious bells and whistles (looks good, works good, my friends are on it) and well-trod ground (don’t sell my data, bro), what would actually make me need it?

There’s only one thing, really. I want a site with a fucking backbone. I want a site that has an ideology, that is explicitly feminist and anti-racist, that is proactively progressive and cares more about users than their abusers. And there’s nothing wrong or even particularly radical about that. Being anti-oppression should not be a radical stance. If you’re really “not racist,” and you want credit for not being a status-quo-hawking monstrosity, then you don’t tolerate racist abuse on your company’s website. Full stop.

You decide what behaviors are unacceptable on your site (it’s not a slippery slope if you make a goddamn list), you create a terms of service that explicitly bans those behaviors, and then you enforce those terms. That’s what “not-a-racist” would do. And yes, those terms have a political agenda.

You cannot address online trolling and harassment without taking a political stance, because trolling is inherently political. When the squalling hordes of Gamergate literally characterize their movement as gamers versus “social justice warriors,” they are drawing an ideological line. Their aim is explicitly conservative—they feel their boys’ club slipping away and they want to conserve it—and as such they deliberately target marginalized groups and their supporters. Gamergate is not a grassroots social movement, it is an obvious arm of the status quo—the same status quo that fuels Facebook’s indifference to the privacy of vulnerable users, that makes YouTube’s block and report functions opaque to the point of uselessness, and that has been quietly steamrolling women off the Internet since its inception.

And these same patterns of targeted, politicized harassment (trussed up as “Oh, they’re just a bunch of random goofballs!”) play out in innumerable iterations across the Web: Tech. Gamers. Men’s rights activists. Certain sets of comedy fans. Anti-feminists. Anti-choicers. Literary snobs. The “you’re too sensitive” brigade and the “free speech” crusaders and the “professional victim” police. They are all frantic, because—no matter how imperceptibly slow the shift might feel—the world is moving toward social justice, not away from it.

Our cultural, industrial, and political institutions are becoming more and more progressive, some gradually, some in leaps and bounds. Marriage equality opponents are falling like dominos. Women now make up about half of all gamers. It’s Anita Sarkeesian who’s invited on TV to shape the mainstream narrative about Gamergate, not her anonymous detractors. That Washington football team is losing ground. “Cultural appropriation” and “victim blaming” are now common parlance. Comedians are thinking twice about victim-skewering rape jokes. Twitter spent the summer roundly mocking “rape prevention nail polish.” Indie publishing platforms for women—Femsplain is one—are popping up. And on and on and on.

If our current social networks don’t get with the program, they’re engineering their own obsolescence.

Whenever I advocate for the safety of marginalized groups on the Internet, some genius always pipes up to say, “Oh, so you just want to live in your echo chamber?” And YES. OF COURSE I JUST WANT MY ECHO CHAMBER, DINGUS. If by “echo chamber” you mean “a space online where I can communicate in good faith with informed people who don’t derail every conversation with false equivalencies and rape threats,” then yes, I’m dying for a fucking echo chamber.