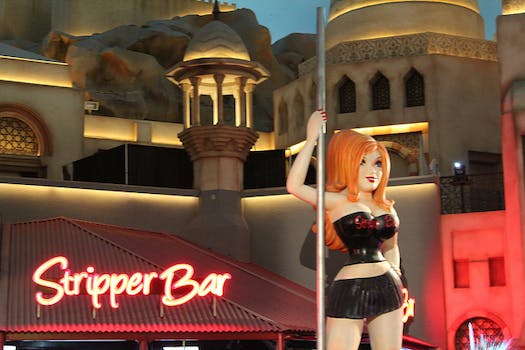 First, apologies for my article about you the other day—you know, when a redditor wrote “Violentacrez was a scumbag. He did something wrong,” thus inspiring you to post your first reddit comment in weeks to ask “Really? Care to elaborate?”. I guess nobody did, because by the time I got around to publishing my slow-news-day piece about it, you’d already deleted your comment.

Can’t blame you for that! I doubt you’d have posted it at all, had you known Adrian Chen would tweet news of it to the world. Didn’t expect that feeding frenzy from the media sharks (c’est moi), did you? You must’ve felt almost as creeped out as the teenage girls whose photos you collected and posted as public masturbation fodder—go online for what you figure will be just an ordinary interaction with your acquaintances, then suddenly find yourself splashed all over the entire damned Internet, am I right? And watch schadenfreude run rampant as people you don’t even know revel in your discomfort. 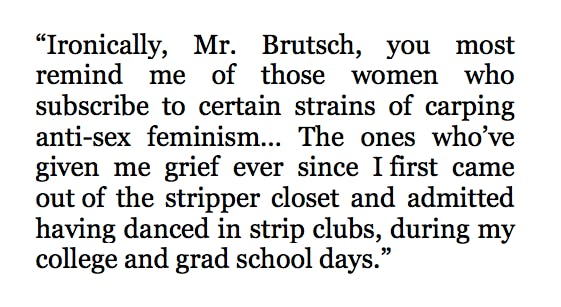 Wrong, Mr. Brutsch. If you need a job, don’t waste your time looking in the sex industry. No self-respecting adult-video professional or strip-club manager would associate with you—in the unlikely event you do land such a job offer, I predict that it’ll come from someone considered sleazy and disreputable even by the rest of the industry. Why? Because your notoriety—the infamy you gained last month after Gawker outed you as the father of r/creepshots, r/jailbait and other sleazy subreddits—came from your consistent violations of the legal sex industry’s two biggest taboos: underaged or non-consenting models.

Ironically, Mr. Brutsch, you most remind me of those women who subscribe to certain strains of carping anti-sex feminism—not sex-positive feminists like me, but those who insist the sex industry must be inherently degrading or exploitative toward anyone in it. The ones seeking to stamp out all strip clubs and sexy models, porn stars and prostitutes; the ones who’ve given me grief ever since I first came out of the stripper closet and admitted having danced in strip clubs, during my college and grad school days. Any time I wear my journalist hat and write on the theme “Ich bin ein ex-stripper, and glad of it,” I catch hell from misogynists-disguised-as-feminists who seem to share the Taliban’s belief that “a woman can be sexy, or she can be a decent human being worthy of respect, but never both at once.”

So whenever I discuss my college days, how I couldn’t live on minimum wage and was glad for the chance to make exponentially more money by dolling myself up and dancing to my favorite songs, I always got sneers from the anti-sex brigade who, creepily enough, often raised the specter of human trafficking: “Oh, yeah? Well, what about those poor women forced to work as strippers or prostitutes against their will, huh?”

Anyone who’d seriously ask that question must have a terrifying mindset, I’ve always thought. How can any sane person not see the difference between “Young woman chooses to dance in strip club because she likes the money,” versus “Young woman forced to dance in strip club after she’s kidnapped by the Russian Mafia?” Hint: it’s the same thing differentiating sex from rape—the matter of consent.

And it’s why you lost your last job when your boss learned about Violentacrez, and why you’re having such difficulty finding a new gig now: not just the dismal economy, but because no sane employer will hire someone who so clearly doesn’t respect the importance of consent. (Want to give a human resources executive nightmares? Ask her to imagine the lawsuits her company would face, if they hired you and you went on to “collect” creepshots of your female colleagues.)

If you want to rehabilitate the name of Michael Brutsch, you first must repudiate the actions of Violentacrez. Understand why they were wrong, rather than try convincing people they weren’t. In order to do that, you need to understand the concept of consent: what it is, why it matters, and why, despite the sexual overtones of the scandal you unleashed, your actions grant you nothing in common with honest, trustworthy, respectable get-nekkid sex-industry professionals like me.