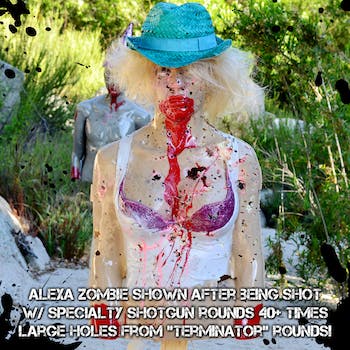 Critics are arguing the target by Zombie Industries misogynistic and tasteless.

The company that had a gun target resembling the president removed from the NRA convention over the weekend is now facing a tidal wave of online criticism for an even more controversial target.

Twitter users created the #NotBuyingIt hashtag Tuesday to protest Zombie Industries and its zombie ex-girlfriend gun target. Critics are arguing the target is misogynistic, tasteless, and encourages violence against women.

The life-size tactical dummy remains onsale through Zombie Industries’ website and has been available on Amazon. Like other targets the company sells, The Ex is designed to spurt fake blood when it is shot.

It goes without saying the effects are gory and, some say, desensitizing. In a promotional video on Zombie Industries’ website, five men line up and open fire on the target with automatic weapons. The front of the target is bloodied and disfigured by the time one of the men in the video walks over, tosses the target face down on the ground, and proceeds to shoot it in the back of the head, at close range with a handgun.

The same company was forced by NRA officials last weekend to remove another one of their targets from the NRA National Convention trade show because it bore a resemblance President Barack Obama. The company told MSNBC that the resemblance was purely coincidence, though their statement seemed less than sincere and made no effort to apologize. The company claimed that “the Zombie virus can affect any living creature regardless of race, gender, religion, ethnic background, or species.”

The company uses a similar (and childish) strain of reasoning on its website to argue that not including a female target would be “discrimination.”

“We take preparation for the Zombie Apocalypse seriously, which is why we strive to have all groups of undead monsters represented in our product selection.  In addition to the Alexa Zombie, we currently sell 15 male zombies, 5 animal zombies & 2 aliens… to discriminate against Women by not having them represented in our product selection would be just plain sexist.”

Zombie Industries did not immediately respond to The Daily Dot’s request for further comment.

Even if one did not find the idea of shooting a semi-realistic human facsimile and watching it gush and ooze blood offensive, the fact that the sole female target is cast as an “Ex” is raising alarms among many activists.

“Gun violence is a gendered issue since it impacts women and men in very different ways,” writes Policy Mic’s Elizabeth Plank. “Because women are more vulnerable to violence within the home than men (and men are most often the perpetrators of violence against women), the presence of a gun makes females less safe, not more.”

Plank points toward a 2005 study that shows that a third of all women murdered are killed by an intimate partner. That year, an average of three women a day were murdered in the U.S. by a romantic partner.

That’s why Plank has started the #NotBuyingIt hashtag and is encouraging others to voice their outrage. There was no shortage of it to be found.

Though Zombie Industries has taken most of the heat, many also turned their ire toward Amazon as well, imploring the company to stop selling the targets.

Update: Amazon has discontinued sales of the controversial ex-girlfriend gun target. The decision comes after the group UltraViolet collected 63,000 signatures to have the target practice dummy, which bleeds when you shoot it, removed from the world’s largest online retailer.

Amazon made no direct response to petitioners, who joined countless others online in condemn the target, but the listing appears to have vanished from the site.

“We are thrilled to see Amazon’s fast response in removing the bleeding ex-girlfriend shooting target from their website,” UltraViolet cofounder Nita Chaudhary told Social Times. “The fact that it exists is yet another reminder of what is at stake for women with gun safety legislation.”