The evolution of Harry Potter fandom

We still need Harry Potter like a Grindylow needs water, but the recent Leakycon illustrated the changing the nature of HP fandom.

The grand lobby of the Chicago Hilton is emblazoned with red and gold (well done, Gryffindor!) in honor of LeakyCon, the Harry Potter fan convention so named for popular HP news and fan site The Leaky Cauldron. It’s my first LeakyCon, but by no means my first HP fan convention; I’ve been coming to these things since the first one, Nimbus2003. I’ve done panels. I’ve manned booths. I’ve hung out with minor celebs. Cons are the moments when my hardcore geek status pays off. These are my people.

Yet even though everything looks familiar, the moment I wander through the crowd, I can tell this is not the Harry Potter fandom I am used to, the one I can set my Time-Turner by (see Prisoner of Azkaban, Chapter 21).

At first I just feel old: The crowd is skewed much younger than the one in attendance at smaller, academically-friendly Ascendio just a few weeks ago. But that’s not it. It’s not even the swollen registration lines or the distinct drop in cosplay—by this point in the evolution of Harry Potter fandom, wizard robes and school uniforms are so ubiquitous they hardly count. 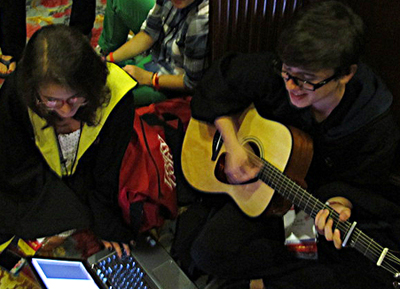 I get my first hint when I hear singing.

“Gotta get back to Hogwarts / where everybody knows I’m cool.”

The irony of hundreds of fans singing these lines at an HP con is not lost on me, but I join in, because who am I kidding? I love this song. It’s the opening number from A Very Potter Musical, the Internet sensation that launched the career of Glee heartthrob Darren Criss and made a student acting group into a professional company known as StarKid, with legions of fans across the world.

Our singalong soundtrack comes courtesy of Zach Palumbo, age 14, who’s bouncing through StarKid’s greatest hits on his guitar while his sister, Mariah, looks up chord progressions via their laptop. The crowd joins in on every song. They’re waiting in an endless line to meet StarKid members at an exclusive signing. StarKid is undeniably the main attraction at this year’s LeakyCon. 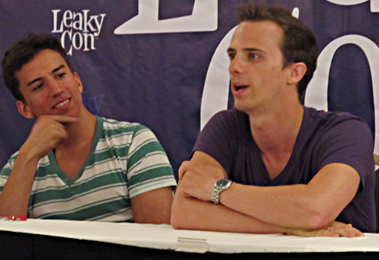 When I joined the Harry Potter fandom, eager for more conversation about the books once my college friends split up for the summer, fans were just beginning to fully embrace the Internet as a community space for discussion, fanfic-posting, and more. Popular mailing list Harry Potter for Grownups was the place to be—even if you had to lie about your age to join up. During its heyday it had over 30,000 members and several spinoff lists just to handle the constant flow of discussion. Now, a decade later, the mailing list has slowed from over 8,000 messages in July 2003 to just 20 in July 2012.

It’s very difficult to find something new to say about books so many of us know by heart.

Academic and recurring con panelist Valerie Frankel, a familiar figure in a broad witch’s hat, agrees with me. “‘Buffy and Harry Potter,’ ‘Teaching and Harry Potter,’ I’m seeing [those] at every con,” she tells me. “I think Joseph Campbell’s been done so much they’ve stopped doing it.” If there’s a dominant academic theme, it seems to be Buffy and Katniss: There are no less than three panels each devoted to the heroines throughout the weekend.

The majority of Potter-centric programming seems to be communal in spirit. There’s an improv RPG, the ever-popular ‘come complain about how Pottermore sorted you into the wrong house’ meetup, and even an interpretive dance-off against the Dark Arts. It’s a fitting choice for a con that’s been built around new ways of being in fandom.

Most LeakyCon-goers discovered Harry Potter when they were very young. With all their complexity and layered myths and unanswered questions, the books provide more than enough material to fuel a massive global fandom for generations to come.

But Potter fans growing up with the Internet have had whole sub-fandoms to get excited about: The Potter Puppet Pals, Niel Cicierega’s viral puppet parody series; A Very Potter Musical and the subsequent unexpected overlap between Harry Potter, StarKid, and Glee fans; wizard rock (Wrock) like Harry and the Potters, the band that started it all; and “Accio Deathly Hallows,” Hank Green’s unexpected viral hit about fans desperate for the release of the final book.

Speaking at the Vlogbrothers’ panel, Green’s brother, acclaimed YA novelist John Green, mentions how crucial “Accio Deathly Hallows” was to their vlog’s success. Vlogbrothers, in which the Green brothers send each other video messages documenting their lives, has been so successful that it, too, has formed its own entire fandom, a troupe of world-changing idealists known as Nerdfighters. I’m struck by the similarity of StarKid and the Vlogbrothers’ sudden rise to fame. Both have been propelled into instant stardom because of Harry Potter fandom, and both have evolved their own fandoms.

Both are about so much more than just Harry Potter. 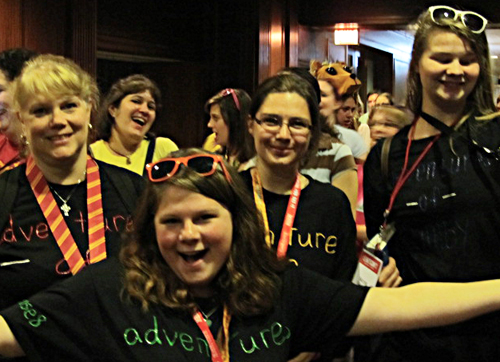 I have a choice between going to a press conference with Harry Potter actors or going to a Tumblr meetup. Evanna Lynch, forgive me, but there’s only one place to be, and its crammed into the standing-room-only meetup with hundreds of other fans who line the walls until they have to put chairs away so everyone can sit on the floor.

Baby-faced con attendee Keith is put on the spot when no one shows up to run the meetup. He settles for going down a list of popular Tumblr tags. The crowd screams approval at things like “Johnlock” and “Loki” and launches into an impromptu singalong of popular One Direction hit, “What Makes You Beautiful.”

The one fandom the never comes up is Harry Potter. 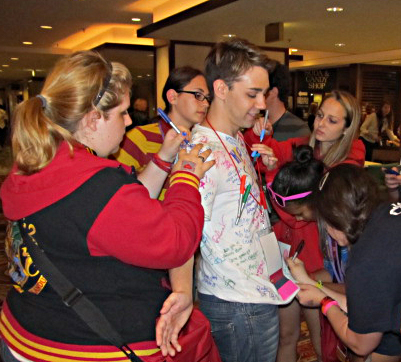 When asked, Keith nervously spells out his own tumblr name, k-e-i-t-h-k-u-r-s-o-n. His eyes widen when the audience takes out their phones and he realizes he’s just been followed by three hundred people at once. Tumblr is the new wave of fandom for everyone in the room: It’s instant, easy, and, as a throng of fangirls confirm to me, allows you to be a fan of everything at once.

LeakyCon knows this appeal. All LeakyCon badges come with ribbons announcing what Hogwarts house you’re in for the weekend, and then, in addition, things like “Whovian,” “Nerdfighter,” “Whedonite,” “Tribute.” Are you a Doctor Who fan? Love The Hunger Games? Then this is the HP con for you.

I know this is smart marketing, but I can’t help missing the HP in my HP con. I walk around the vendor room, where T-shirts and posters advertise Harry Potter/Docter Who crossovers and Voldemort Can’t Stop Barack, a riff off the popular “Republicans for Voldemort” slogan and the Harry and the Potters’ 2004 album, Voldemort Can’t Stop the Rock!  I bump into a fan who’s frowning at all the hybrid memorabilia.  “I just wanted a Slytherin house T-shirt,” she says.

I sympathize, but I want to tell her that she’s about seven years too late. The rest of HP fandom picked their houses back while Harry was still crushing on Veelas (see Goblet of Fire, 2000). There’s no longer any need for vendors to sell what everyone already owns. Then, earlier this year, came Pottermore, J.K. Rowling’s own post-universe website, which comes complete with an elaborate house-sorting process that somehow manages to feel both authoritative and completely wrong.

Using house as an identity marker in HP fandom is not only passé but a hopeless cause. These days, it’s all about whether you loved Wrock band Ministry of Magic more than Remus and the Lupins. Or whether you play Quidditch, the fictional game on broomsticks that’s become a popular real-life sport, often drawing fans that have no other connection to Harry Potter. Do you just come to HP cons for Starkid reunions? Are you a Nerdfighter? Love The Hunger Games?

These things carry more weight than being a Muggle in Slytherin house.

“Just call me Luna—all my friends do,” says the girl wearing Spectrespecs (to help you see Wrackspurts). She’s coming from the costume contest, and although I’ve seen far more elaborate Luna Lovegood cosplay throughout the weekend, hers charms me the most. We talk about Evanna Lynch, the beloved Harry Potter fan who became famous when she was cast as Luna in the Harry Potter film franchise.

Lynch, an anorexia survivor, credits Harry Potter with saving her life, and this Luna agrees. “Our birthdays are only four days apart, and we’ve been through similar struggles,” she tells me on her way down to meet Lynch at a signing. As we bond over how much we adore both Lynch and Luna, I feel, for the first time all weekend, the stirrings of that intrinsic connection that I’m used to at these conferences—the sense that perfect strangers are old friends. Harry Potter fandom has changed our lives in major ways, and by the time we hug and part, we’re both verklempt. 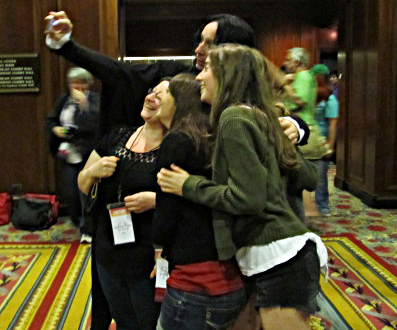 Another cosplayer, Nigel Taylor, has spent his entire weekend being mobbed by fans amazed at his resemblance to Alan Rickman’s Severus Snape. His cosplay even has its own Facebook page.

LeakyCon is only his third Potter con, but he’s done fantasy conventions as well, usually cosplaying as Snape. “There hasn’t been any shift [over time] in the way people react,” he tells me, except for one fantasy con-goer. “They were like, ‘Oh, so, now that the movies are over, what are you gonna do?’ My response was, ‘I don’t know. Ask the Stormtroopers.’ There’s going to be a Harry Potter fandom that rivals that of Star Wars.”

Looking at the ongoing delight that everyone in attendance seems to feel throughout the con, it’s impossible not to agree. “There will never be anything like the Harry Potter fandom,” John Green tells the massive audience at the Vlogbrothers panel. “You had to have the right people, the right music, and the right stories. But we don’t need to have anything else, because we have this.”

And it’s true. Sub-fandoms like StarKid, Wrock, and Quidditch will all have their moment.  Wrock’s has already passed, with old bands retiring and new bands coming in too late to the craze. When pressed to talk about new projects, StarKid’s production team was firm that A Very Potter Senior Year was the last Potter musical they would do and emphasized the need to find ways to collaborate while focusing on individual projects. Even the massively popular Potter Puppet Pals has drawn fewer crowds as the post-Avenue Q puppet craze fades.

We still need Harry Potter like a Grindylow needs water. Whatever new fandom trends arise, they’ll continue to occur because of the love fans keep bringing to Harry, Hermione, Ron, and the rest of the wizarding world. 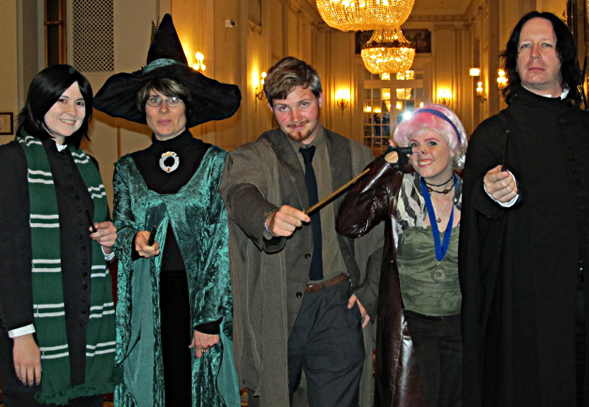 Correction: Keith was not a LeakyCon staffer as previously reported.