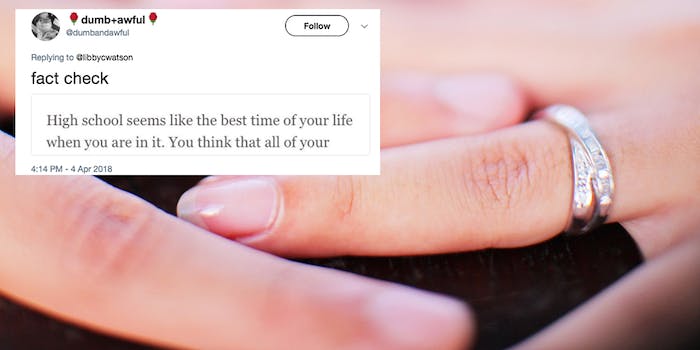 'Sometimes I have issues with jealousy.'

Every now and then, a piece of profound writing takes the internet by storm with its groundbreaking ideas, keen observations, and graceful prose. This is not one of those times.

An essay picked up steam on Twitter on Wednesday for none of those reasons, attracting mockery for being a petty and even concerning take on dating. Titled “You May Have Worn the Prom Dress With Him, But I Get to Wear the Wedding Dress,” the essay was perceived as a condescending (and insecure) open letter from writer Victoria Higgins to her fiancé’s ex-girlfriend.

Many people couldn’t even get past the first line of the essay, which hails high school as seemingly “the best time of your life” for high schoolers. The claim excludes the staggering number of people who had humiliating and/or horrendous high school experiences.

Could not get past first line of story: "High school seems like the best time of your life when you are in it."

"High school seems like the best time of your life when you are in it."

"High school seems like the best time of your life when you are in it."
hmmmm……
No

But that’s just the beginning. Higgins, whose bio states that she’s a Missouri State University student, goes on to not-so-humbly brag about getting to marry her fiancé while managing to both patronize and envy the anonymous addressee.

“I wish I could say that I am sorry it didn’t work out for you, but I can’t,” Higgins writes. “I can’t because he is mine now, and I get to cherish him forever.”

“I hate that you got all of the high school stuff with him,” she writes. “You got to go to games and support him. It kills me that I couldn’t be there for him because I know I would have actually been there wholeheartedly.”

"sometimes I have issues with jealousy" lmao bitch you online thrashing his hs gf you never met for no damn reason https://t.co/QHEIWD98EK

On Twitter, people found Higgins’ language, and her insecurity, concerning. They worry the essay reveals a whole depth of issues that should be resolved before entering into marriage.

I am going to put this out there: If you are this jealous of your fiancé's prom date, you should NOT BE GETTING MARRIED. https://t.co/auakCpwsIz

“I try to not get jealous of all of the things you got with him because it is all in the past. You had your time, and now I get the wedding.” pic.twitter.com/piAoXhgMny

And while it’s true that Higgins may want to reflect on what her public gloat of “I get to wear the wedding dress” and sneering letter to her fiancé’s prom date might insinuate for the future of her relationship, some critics got carried away with the hysterical women trope.

This is a specific kind of crazy and is more commonly known as a "red flag". If homeboy ignores the article and doesn't run, screaming away from the engagement, that's on him; she's letting you know that she ain't right.

But in a time when women should be supporting women and not publishing resentful, braggadocious essays about them, Higgins’ writing leaves much to be desired. Here’s to hoping that the public criticism encourages her to reflect on her clearly-not-under-control jealousy and consider couples therapy.

In the meantime, we’ll be waiting for the satirical takedowns—and the sequels.

I'm guessing the next one is titled: HE WAS A DIAMOND IN THE ROUGH, AND I POLISHED HIM