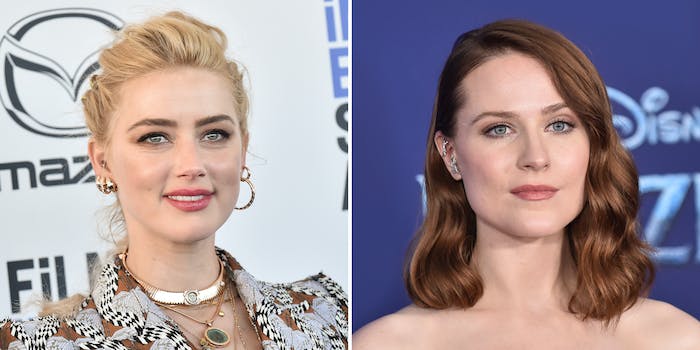 'No matter what I say, it WILL be taken out of context.'

Evan Rachel Wood addressed the press in an Instagram post Wednesday, touching on the comparisons it has made between her and Amber Heard.

In the post, she accuses the media of “chomping at the bit to say I support one over the other,” referring to the Amber Heard-Johnny Depp defamation trial that ended last month and a few recent stories that claim Wood “supports” Heard. She adds that in 2016 she tweeted that she wouldn’t comment on the allegations between Depp and Heard, “and I still have NOT.”

Wood and at least four others have accused Marilyn Manson of abuse and assault. Manson is suing Wood for defamation, and after the Depp-Heard trial, many TikTok creators started comparing the two or diving into Wood’s allegations. (While still fixating on Heard.)

An image also circulated on Twitter, allegedly taken from Wood’s Instagram story, in which she addresses a photo of her and Heard seated next to each other at a 2015 event. The image has been held up in some anti-Heard corners as proof of conspiracy between the two.

“With certain logic,” reads the caption, “everyone who was seen in a photo with weinstein would have to be a rapist.”

“The support amber gave evan vs what she gets in return,” reads a viral tweet from @ibelieveamber, comparing that image with a 2021 tweet from Heard about the Manson allegations.

That image doesn’t exist on Wood’s current Instagram story. It’s possible she deleted it, but it’s still being used to further discredit Heard and Wood, or allege Wood was comparing Heard to Harvey Weinstein.

A couple of days ago, Wood posted a report from Bot Sentinel, which concluded Heard faced coordinated harassment on Twitter during the trial, and that roughly 627 accounts’ primary focus was tweeting anti-Heard sentiment. “I’m so sorry that after everything this is what you have to go through mama,” Wood wrote.