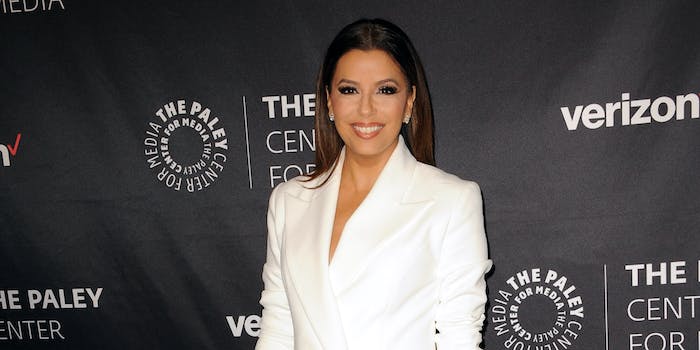 People weren't having it.

Eva Longoria is clarifying comments she made about voter turnout in the 2020 presidential election after her original remarks went viral for appearing to downplay Black women’s roles in helping win President-Elect Joe Biden the election.

On Sunday night, Longoria—who previously hosted the first night of the Democratic National Convention and was a national co-chair of Barack Obama’s 2012 presidential campaign—spoke with MSNBC anchor Ari Melber about the role that Latina women played in the 2020 election. It was part of a conversation on the women who helped Biden get elected.

“The women of color showed up in big ways,” Longoria explained. “Of course, you saw in Georgia what Black women have done, but Latina women were the real heroines here, beating men in turnout in every state and voting for Biden-Harris at an average rate close to 3:1.”

Longoria goes on to explain just some of the issues Latina women were concerned about in 2020, why Donald Trump’s campaign never offered anything they wanted, and the additional voter suppression they faced when going out to vote. According to early exit polls, 70% of Latina women voted for Biden compared to 28% for Trump.

However, many took Longoria’s praising of the Latina women voters, in which she called them the “real heroines here” right after talking about Black women in Georgia, as a direct downplay of just how much Black women helped secure Biden’s victory. (Per those exit polls, 91% of Black women voted for Biden.)

Critics highlighted Longoria’s anti-Black comments and the limits of the term “people of color”—and used Gina Rodriguez, who’s come under fire multiple times for her own anti-Black comments, as a comparison about how pervasive anti-Blackness can be in the Latinx community.

Longoria’s comments also managed to erase people who identify as both Latinx and Black.

After Longoria’s comments went viral, she apologized while adding that she didn’t word what she meant to say clearly. She said that when she called Latina women heroes, she was comparing them to Latino men.

“I’m so sorry and sad to hear that my comments on MSNBC could be perceived as taking credit from Black women,” Longoria said. “When I said that Latinas were heroines in this election, I simply meant that they turned out in greater numbers and voted more progressively than LATINO MEN.”

Longoria also acknowledged the history of anti-Blackness in the Latinx community.

“There is such a history in our community of anti-Blackness in our community and I would never want to contribute to that, so let me be very clear: Black women have long been the backbone of the Democratic Party, something we have seen played out in this election as well as previous ones.”

Some, such as Kerry Washington and Yvette Nicole Brown, thanked Longoria for her clarification and defended her.