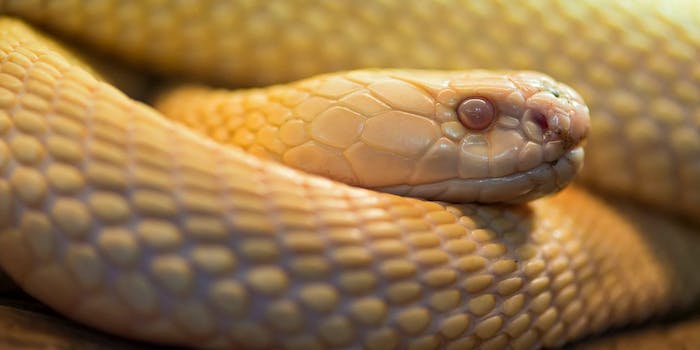 After reportedly biting its owner and causing his death, a killer cobra snake is on the loose in Austin, Texas.

And as is to be expected, that snake now has joined Twitter to 1) let panicked people know its whereabouts, and 2) taunt local officials who want to catch it.

First things first, the snake has to find a place to live in a city that’s become a popular destination for hipsters, mustache enthusiasts, retirees, hipster retirees, and (apparently) poisonous reptiles.

Looking for a place, does anyone know if there are any new condos around?

#txlege is way more responsible for hurting Texans that I am, but thats none of my business ☕️🐍 https://t.co/UxwWDVB5RN

…To try the nationally-recognized local cuisine…

…And to look for traditional Texas footwear.

This is cold, even after I told you I wanted boots but not snake skin. Gonna have to get mine from a thrift store https://t.co/TJv5xoVdEF

But not everybody is laughing, and some authorities have tried to tempt the reptile with tacos in order to catch it.

.@Austin_Cobra If you could meet us in the Lowe's parking lot tomorrow a.m. it would be super helpful. We'll bring the tacos, sticks & sacks

But here’s the worst news of all for Austin_Cobra. There’s a new sheriff in town that also has joined Twitter and is now on the lookout for an escaped snake.

@Austin_Cobra I'm coming for you. Check your 6, snake.

Update 3pm CT, July 17: According to the Austin American-Statesman, a cobra was found dead on the service road of Interstate 35 at about 3:30am Friday, and a local medical examiner will analyze it to determine if it was the cobra that killed its owner.

The snake appeared to have been run over. Somehow, though, the Twitter account lives on, leading us to wonder whether the photo below is simply the beginnings of a conspiracy theory.

When you turn up on Thursday but have to be at work early on Friday pic.twitter.com/S5Kb1L5Q7h

Photo via Tambako The Jaguar/Flickr (CC BY ND 2.0)