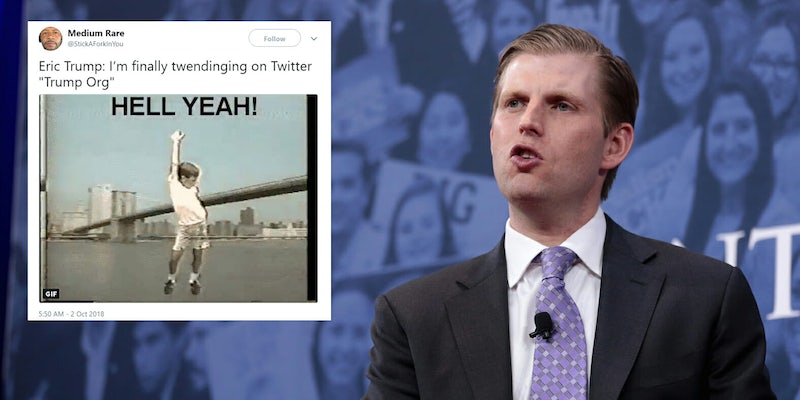 People were surprised to see Eric Trump was trending.

President Donald Trump was personally involved in trying to stop Stormy Daniels, the adult film star who says she had an affair with the president, from discussing their relationship publicly and asked his longtime lawyer Michael Cohen to work with his son Eric Trump to help, according to a new report.

The president called Cohen to try and get a restraining order against Daniels, whose real name is Stephanie Clifford, and work with Eric Trump and another outside lawyer, the Wall Street Journal reported on Tuesday. The president’s son also reportedly asked a Trump Organization attorney to sign off on arbitration paperwork.

Eric Trump’s direct involvement with the Daniels matter has not been previously reported, the newspaper points out, and shows that the president continues to be involved with his company—which his sons have taken over since the 2016 election.

Cohen recently pled guilty to eight different felony charges and, as part of his deal with the government, said the president was aware of and ordered him to make a $130,000 hush money payment to Daniels ahead of the presidential election. Meanwhile, Daniels has made waves online after making some less-than-flattering comments about the now-president in her book Full Disclosure.

However, people online mostly zeroed in on Eric Trump’s involvement, as the president’s son appears to get less of the spotlight than his other children Donald Trump Jr. or Ivanka Trump.

'My dad gave me something to do!' – Eric Trump pic.twitter.com/uODA7BbNkV

Directing Eric Trump to do anything could be quite a challenge. pic.twitter.com/AltElzpDPF

When you see the name @EricTrump trending you know it's not because he won a Noble Prize for physics.

Eric Trump needed a new scandal, his brother was too far ahead of him https://t.co/GFjq3fBuT6

Wow, both #EricTrump and #NobelPrizeInPhysics are trending at the same time. Let me guess, there is absolutely no connection between the two.

I think I know why #EricTrump ‘s mission failed: it was headed by Eric Trump

Me clicking to find out why "Eric Trump" is trending. pic.twitter.com/sQf3xRCGsv