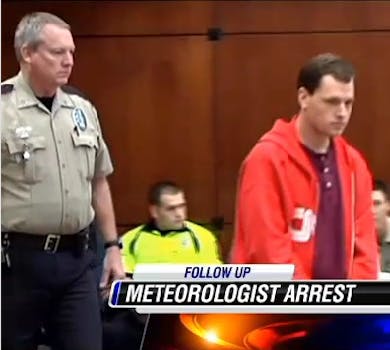 A meteorologist for WLBT in Jackson, Miss., has been charged with what amounts to statutory rape.

As a meteorologist for WLBT in Jackson, Miss., Eric Law might be the city’s closest thing to a local TV star. More than 6,000 follow him on Twitter, where he tweeted weather updates and details about his personal life. “Yes, I am still sick,” he wrote to one follower concerned about his health on Feb. 25. “But will work in studio tonight.”

Law has been charged with what amounts to statutory rape. Police allege he used Facebook to chat with his 15-year-old victim—providing details so explicit they proved the final piece of evidence they used to charge him with two counts of sexual battery and two counts of gratification of lust. He faces a maximum prison sentence of 90 years in prison.

Police arrested Law on March 7, after the girl’s parents approached the Sheriff’s department concerned about their daughter’s relationship with an older man. They showed county investigators the Facebook messages between Law and his victim, which “indicated the two have had sexual contact,” according to the police report. Police brought the girl in for questioning, and she confirmed their suspicions. She said the encounters occurred at Law’s residence in something called the “law and order” room.

“(Redacted) stated she and Eric would go to the ‘law and order’ room (redacted) and this is when they would engage in sexual behavior,” the report stated.

He’s now out on $200,000 bond. WLBT has suspended him without further notice.

On Twitter, where Law’s account has been silent since Feb. 27, some of his followers are apparently clueless about his arrest.

“Been a while since we’ve heard from you @EricLawTV,” Anthony Palomo wrote on March 10. “Where you been bro?”