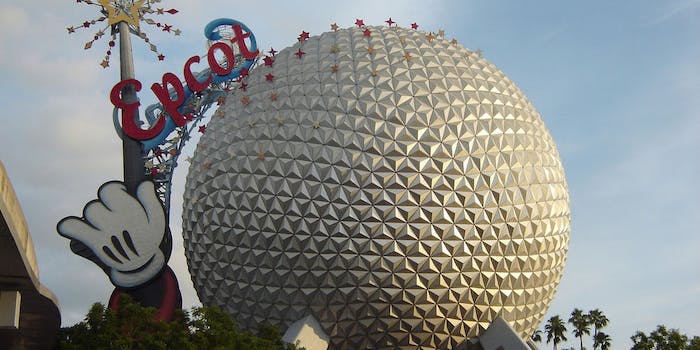 The reclusive author of @EpcotCentre talks Disney, boredom, and the absurd

It really is too good to be true.

Imagine it’s 2013, and the bigwigs at Disney are sitting down to discuss their marketing and social media strategy for the coming year. It’s an intense debate that goes into the wee hours of the morning.

Finally, they seem to have everything outlined and ready to go. Everyone is exhausted as they rise from the table. But a plucky young intern who’s been fetching sandwiches all day clears his throat.

“Ahem… um, guys, if you don’t care, my aunt’s been working at Epcot for 20 years now and, um, she just found out about Twitter and, well… she’d like to make an account for Epcot,” he says. “She’s getting along in years and, you know, I think she just wants to feel useful again.”

The room falls silent as CEO Bob Iger glares at the brazen young man for what feels like an eternity.

“Whatever,” he finally says, and with that, the meeting is over.

That’s what you might think happened if you stumbled across @EpcotCentre on Twitter. But the truth is, it’s the creation of Chris Murphy, who says he was just bored. And fittingly enough, the tweets are mundane to the point of absurdity.

If you get a rip or tear in your clothes, go see Jackie at Guest Services. She has a little sewing kit.

Our 2016 magnetic calendars are absolutely free & will be available by the end of March. You can put them right on your refrigerator.

Others seem to imply some sort of backstory.

I created this account so I can share important info with Epcot fans, not so strangers can make humiliating comments about my spouse.

The pine cone wreath on Epcot's front gate was made by my grandson, so it would be nice if people didn't stick their gum on it.

You can't just say you didn't have a good time at the park and ask for your money back. It doesn't work like that.

Q. Do you have a pool? – Glaucia (Brockton, MA) — A. No, but you can use the one at the YMCA on International Drive if you're a member.

Q. Which attractions are popular with teens? – Tani (Port Vila, Vanuatu) — A. Teens seem to like anything with loud noises and lasers.

Murphy also took a little time to answer a few questions, via email, for us here at the Daily Dot.

I was kind of bored with Twitter and wanted to try something different. I started tweeting in 2011 as @chrismurphyusa and created the @EpcotCentre account in late 2013. I thought it would be funny to parody a corporate account and make it seem earnest but inept instead of making it patently outrageous. I didn’t want it to be obvious. I liked the idea of this massive, billion-dollar theme park being run like some rinky-dink operation.

Have you ever actually been to Epcot?

Yes. I went to Disney World with my family around 1986. It was my first visit to Florida. I don’t remember a whole lot about Epcot so I have to rely on Wikipedia for most of my information. I do remember that “Captain EO” was brand new and the lines to see it were incredible.

A lot of your tweets tend to rely on subtlety. How do you find the line between being absurd and being at least somewhat believable?

I generally keep them dull and and try to add just enough detail to make them appear legitimate. Sometimes it works. One of my biggest influences is Don Novello. His “Lazlo” books are absolute gold. He walked the absurdity-believability line so well. No one did it better than him.

How often do you think people believe these tweets are actually coming from the real Epcot Center?

It would be a lie to say I don’t get a kick out of causing confusion. A large percentage of the tweets get comments from people who clearly don’t know what’s going on. Sometimes I feel guilty about it. Tricking innocent strangers into believing a phony theme park Twitter account is real isn’t very mature.

If you read enough of your tweets, it seems like they’re coming from a very specific person. Is there a character in your head who’s writing all of this?

I’m glad you think so. I feel like I’ve gotten a little better at keeping the same voice. I tell myself the person running the account is a woman in her late 50s. She’s originally from southeastern Missouri and has worked at Epcot for over 25 years. I want it to come across like she doesn’t know much about public relations, social media, or professionalism, but is somehow running this account—and no one is supervising her.

You’ve racked up over 56,000 followers. Was there a point where it seemed to really take off?

Within the first couple months it grew from a few hundred followers to a few thousand. I got lucky. Patton Oswalt retweeted a couple and it snowballed.

Now that you’ve developed such a following, do you feel any kind of obligation to post on a regular basis?

I usually do a few per week. I’ve only produced about six hundred tweets in over two years, so it’s not like I’m breaking my back. I enjoy it and I haven’t hit a wall yet, so I’ll keep rolling. Some people play video games or do crossword puzzles, I do this. I’m thrilled that so many people are on board with it. The world is weird.

Has there been any response from Disney?

None. I used to be very coy and didn’t want to be outed as the creator of the account. Disney is famously litigious and I was vain enough to think they would be concerned about what I was doing. They aren’t. Just to play it safe, I take care not to mention Disney or anything that has to do with Disney World besides Epcot itself. I also don’t use profanity or say anything that would cause genuine outrage or panic.

Who was your favorite Disney character growing up?

I watched plenty of Disney movies and television shows growing up, but I can’t say I had a favorite. My mom took me to see The Rescuers in the late ’70s, and I believe that was my first movie theater experience. It’s a Disney cartoon about mice, but not Mickey and Minnie. Bob Newhart and Eva Gabor voiced the main characters.

Do you have any other creative projects people should know about?

Not at the moment. There is an Epcot Centre Tumblr. It’s good for a few laughs.

What’s your favorite thing that you’ve ever tweeted?

Rumors about guests smelling radon gas at one of the restaurants here at Epcot are completely unfounded. Radon gas is odorless.

What’s the best response you’ve ever gotten to a tweet?

The fact that it has received any response at all is pretty flattering. I didn’t count on it having very wide appeal. I enjoy seeing people make callbacks to the fictitious characters and events I’ve mentioned in older tweets. Just to be dumb, I got in the habit of tweeting lines from the chorus of “The Way It Is” by Bruce Hornsby & the Range, and people would tweet other lines from the song back to me. Something about that made me laugh really hard. The inanity of Twitter. It’s such a waste of time!