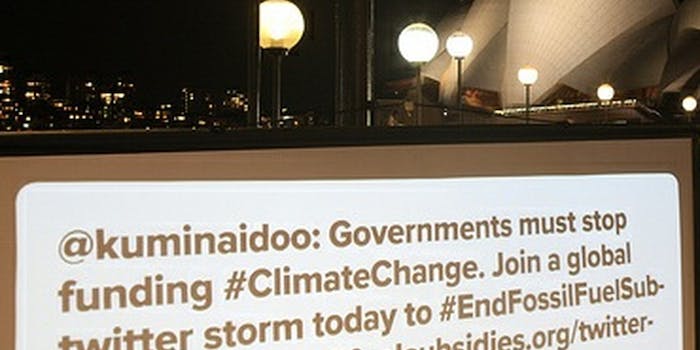 #endfossilfuelsubsidies has been tweeted more than 32,000 times in the last 24 hours, leading up to the Rio Earth Summit.

With world leaders gathering in Rio de Janeiro for the Rio Earth Summit, activists are storming Twitter in an attempt to convince them to halt government subsidies for fossil fuel companies.

Campaigners have been tweeting the hashtag, #endfossilfuelsubsidies, since 4 am Eastern Time Monday, trying to make their voices heard. They’ve achieved some success, with the hashtag hitting the trending topics list in the U.S and Australia, as well hitting the top spot on the worldwide list.

The so-called “twitterstorm” campaign is being led by climate activism site 350.org, among others.

“[D]uring today’s twitterstorm tweets are flowing in at a rate of about 1 per second,” Daniel Kessler, 350.org’s media campaign manager, told the Daily Dot.

“People are fed up with dirty energy running the show and want action now. Time will tell how much influence this has but politicians who ignore the will of the people do it at their own risk. The Rio text is at a crucial point, and we are hopeful this event will solidify support for ending wasteful fossil fuel subsidies.”

The hashtag campaign received support from figures such as comedian Stephen Fry, along with a number of politicians. It came on the same day that activists delivered a petition with more than 750,000 signatures to the U.K. prime minister’s residence in London.

The hashtag has been tweeted more than 32,000 times in the last 24 hours, according to social media search engine Topsy.

Activists projected some of the tweets in Sydney and New Delhi, while others were scheduled to be projected in London, New York, and Rio de Janeiro.

The “twitterstorm” comes as Rio Earth Summit delegates clash over the issue of subsidies. Big oil-producing countries, such as Saudi Arabia and Venezuela, are allegedly holding up progress on the subsidy issue.

A report last week claimed that government fossil fuel subsidies total at least $775 billion globally every year, and may be as high as $1 trillion. Oil Change International, a site “focused on exposing the true costs of fossil fuels” claimed in January that the oil, gas, and coal industries get $59 in subsidies for every $1 they spend on campaign contributions and lobbying in Washington.