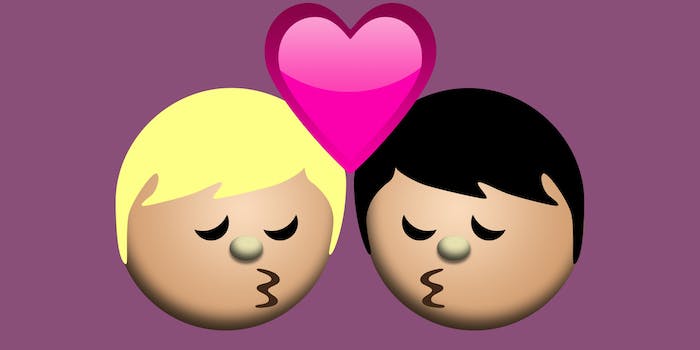 Kissing your boyfriend over GChat isn't as easy as you think.

There is no emoticon for a masculine kiss. In our many means of electronic communication, from cell phones to instant messaging, the simple act of kissing is often feminized. It may not be evident or relevant to most emoticon users, but to me—a man who kisses other men—I can’t help but notice the mismatch between the person I’m sending a kiss to and the expressed gender of the little face in my chat window.

My boyfriend and I both have desk jobs, and often communicate via GChat throughout the workday. It’s a nice alternative to texting, mostly because each of us can still look like we’re working. Whenever we sign off, though, the goodbye kiss I type, :-*, transforms itself from a simple ASCII ideogram into a bright yellow circle with big, blinky eyelashes and bright red lips, puckered like a Warhead. It’s not quite the kiss I’d meant to send.

“I think of it as a drag queen face,” my boyfriend says, generously, making the best of a heteronormative situation. But as badly as I need and want a standard-keyboard drag queen face, I know the truth: The computer says kissing is for girls.

I mentioned the feminine GChat kiss to a friend of mine, an accomplished heterosexual woman of color whose privilege-dar is typically on-point, and was met with genuine surprise. “I never noticed!” she said. She was presumably not as bothered by sending puckered, red lips to her boyfriend as I had been in sending the same to mine.

I know the truth: The computer says kissing is for girls.

I imagine that to most people, if they notice at all, the femininity of an emotikiss makes sense—either they are women, or they’re sending a kiss to a woman, or they just really don’t get wrapped around what an emoticons look like. Fair enough. But it strikes me that, even in the context of emoticons, “I don’t see gender” is about as sound a defense, in 2015, as “I don’t see color”—a way of refusing to engage with an issue you choose not to find personally relevant. The fact that kissing is consistently gendered as overtly feminine deserves at least as much attention as the conversation about emoji and race.

My aforementioned friend was bothered, as were many people, by the racial homogeneity of characters in the now ubiquitous emoji keyboard, a set of Unicode pictograms that stand in for older, simpler emoticons like :-) , :-( , or :-/ . Emojis depicting people range in skin tone from Crayola peach to Simpsons yellow—cartoon for default-white. Late last year, the Internet swirled with rumors of soon-to-come selectable skin tones on all emoji faces, which would ring in an end to the emoji race problem. As of November, this change was expected by mid-2015, and just this week the world got a look at the emoji POC we can expect to see in our texting future. The update seems simple enough but has been prevented thus far only by the vague international tech bureaucracy of the Unicode Consortium.

In New York magazine this past November, Adam Sternbergh delivered the most comprehensive word yet on the emoji, tracing the little faces’ evolution from Wingdings to the smiling poos of today. “It’s easy to dismiss emoji,” Sternbergh writes. “And yet, if you have a smartphone, emoji are now available to you as an optional written language, just like any global language.” Acknowledging that emoji are real components of language, as well as a language unto themselves, is the first step to taking seriously the way they affect our communication and our thinking.

Like language, emoji and emoticons have a finite vocabulary, which delineates the boundaries of possible expression. In a Saturday Night Live “Weekend Update” segment last year, Sasheer Zamata and Michael Che spelled out African-American experiences using only the available emoji characters. “There are over eight hundred emojis available on Apple products, and not one of them is of a black person,” Zamata says. “So if I want to refer to myself with an emoji, this is what I have to use,” she says as the New Moon With Face emoji appears on screen, looking like “a baby Charles Barkley.”

Zamata’s missing “I” is at the crux of the problem with emoji and representation. Ironically, a visual language of over eight hundred characters has succeeded in portraying only a narrow sliver of expression. Within the constraints of the emoji alphabet, users are forced to euphemize everything from sex to non-white personhood. It can be an entertaining exercise in winking interpretation, but one that’s decidedly more fun on some subjects than on others.

Zamata and other non-white, non-heterosexual people are excluded in a literal way from even their own conversations. Without a word for something, whether abstract or concrete, how can we ever hope to discuss it? Where would we be without the term “humblebrag?” Or without the otherwise-ineffable smugshrugginess of ¯_(?)_/¯ ?

Without a word for something, whether abstract or concrete, how can we ever hope to discuss it?

LGBT emoji are easier to come by than non-white emoji, if you’re willing to be creative. There are hearts in every color of the gay pride flag, two men and two women holding hands, a flamenco dancer-slash-Rupaul’s Drag Race contestant, and a beaming bride easily multiplied by two. If context can turn a peach into a butt, emoji fruits and vegetables have only just begun to scratch the surface of the gay experience.

My aging iPhone finally crashed a few weeks ago, and I replaced it with an Android phone, mostly for financial reasons, but also to get away from the endless OS updates and conversations with other people about OS updates. As I settled into my new texting habitat, however, I discovered a number of unfortunate changes to my emoji keyboard. My flamenco queen had become a tubby man in a blue sweatsuit, hair-flip girl was gone entirely, and the erstwhile smiling poo had no face—a velveteen turdlet. Everyone is still white in Android’s emoji keyboard, and in fact, many of the female faces have been swapped for male ones.

There were still two men and two women holding hands, but this time the third pair of hand-holders, the heterosexual pair, had a small red heart floating between them. Where I had previously been free to project a love story between the two little hand-holding men, complete with a pair of top hats and a diamond ring, the Android version of this would-be romance made clear that what the two men had, whatever it may have been, was still shy of a floating red heart.

Ironically, the more an emoticon aims to illustrate, the more narrow its representation becomes. A level of universality is lost at each stage of the progression from a simple ASCII smiley, :-) , and a yellow “smiley face”-style smiley to a smiling blond caucasian man. The third character is the most “expressive,” in one sense, but the most narrowly applicable of the three. Two little people holding hands, with no other distinguishing features, can be a symbol of human connection of almost any sort; with the addition of skin tone, clothing, and little floating hearts, the image takes on a significance too specific to remain an abstraction, and instead becomes a narrowly concrete and all-too-predictable noun—”heterosexuals.”

And so it is with the GChat kiss. Instead of the gender-neutral smooch I try to type, three keystrokes that form a semi-convincing face, GChat’s cutesy animation turns my simple goodbye into a cabaret number. (I swear sometimes I can almost make out a beauty mark.) In each of its four emoticon styles, the kiss includes bright red lipstick. From the little pink cube face overgrown with eyelashes to the understated colon-eyes with a bright red asterisk mouth, none is as gender-neutral as where it started.

The standard emoji kiss is relatively one-gender-fits-all, with puckered, uncolored lips and a coy wink—it’s a rare treat, and one thing the emoji keyboard has gotten right. But in other electronic venues, seeing a femme little smooch floating among my boyfriend’s words reminds me of all the ways our love doesn’t fit in. Like trying to find a love song without heteronormative pronouns, I can’t find an “I” in the GChat kiss.

The more an emoticon aims to illustrate, the more narrow its representation becomes.

:-) has no race, and :-* has no gender expression. Perhaps a more universal goal than even capital-”R” Representation (e.g., selectable skin tone) might be de-Representation, a scaling back of visual depiction from concrete images to abstract concepts. A simplification across the board might just exorcise the default settings of white, male, and heterosexual that permeate our visual languages.

Part of me still wishes that someday I might receive an unambiguously masculine emoticon kiss—that, in the future, over GChat or on my desktop-sized iPhone 12, I’ll see a small, medium-brown face with a strong jaw and a two-day growth of beard, unshadowed eyelids lowered in sexual concentration to deliver a tender, meaningful, gender-appropriate electronic kiss. But as nice as that would be—and it would be so, so nice—I know it would only be part of the problem.