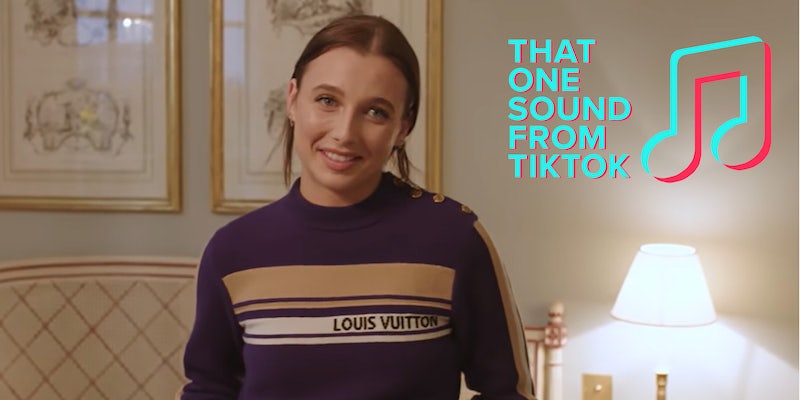 A sound from a 2021 video is now the soundtrack for our current mood.

There are plenty of iconic laughs on TikTok, but this week’s sound is a little more reflective of the current, uh, mood. Here’s how an old Emma Chamberlain video got TikTok laughing.

I would describe it as nervous laughter, and that’s typically how it’s been used on TikTok: To convey an awkward experience or harsh truth.

On April 20, the account cuppyskull posted the audio, with the caption “when my friend is telling me dark jokes about their dead family.” It has more than 3 million views, and has been used in more than 50,000 TikToks.

“Suppressing your emotions can lead to memory loss,” reads the caption on another viral clip.

i cant be the only one who jogs plz 😭

The original TikTok hashtags Emma Chamberlain, the popular YouTuber and influencer. The audio is from a January 2021 video titled “2021 MAKEOVER,” in which Chamberlain dyes her hair and regrets it.

Around the 5:25 mark, she wonders if her darker hair color is going to “affect my love life,” then she does the awkward laugh.

The hashtag Emma Chamberlain laugh has more than 25,000 views on TikTok.

Chamberlain, who has more than 11 million followers, took a hiatus from YouTube earlier this year, for her mental health and to start a coffee company. She returned to YouTube in June, and in May became something of a meme thanks to her Met Gala interview with Jack Harlow.

@voguemagazine Reply to @livvy_loo5 she was indeed too stunned to speak. @missionaryjack and #EmmaChamberlain on the #MetGala ♬ original sound – Vogue

We reached out to cuppyskull and Chamberlain for comment.

Update 2:51pm CT, Aug. 23: Cuppyskull tells the Daily Dot the clip was one he saved in his camera roll because it had meme potential, then forgot about: “I was actually just trying to clean up my photos and was just revisiting old things to delete, and I saw the clip. I laughed and thought of the first scenario [that] came in my mind that fits the clip, and immediately posted it.”