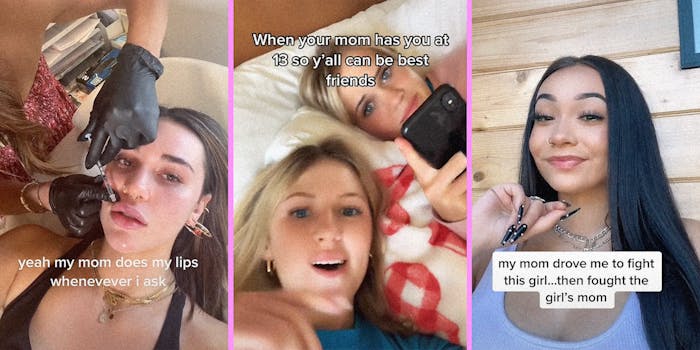 'I had to explain furries.'

Eminem’s 2009 single “My Mom” has made it to TikTok and is being used to soundtrack some illuminating stories about mothers.

This particular sound originated on the account drippingwax, who claims that “My mother grew up with Eminem’s brother, seems she took some of his moms traits.” The TikTok has more than 1 million views.

The comments are turned off, but in the caption they say, “This is not a good thing don’t congratulate me or whatever.”

The song is just one of several in which Eminem calls out his mother, Debbie, for the way he was brought up. Eminem even notes this trend in the song, saying, “I know you’re probably tired of hearing about my mom.”

But on TikTok, people had much more interesting stories about their moms, ones that involved hiding razor blades in their hair and accidentally booking a hotel during a furry convention.

Some of the examples touched on more traumatic experiences, echoing the trend that accompanied Kanye West’s “Ghost Town” on TikTok.

But not all the TikToks in this trend were negative: Some used it to call out cool shit their moms did.

Back in March, Eminem was allegedly on the verge of being “canceled” after TikTokers discovered the lyrics of 2010’s “Love the Way You Lie.” That obviously didn’t happen, but it didn’t stop Eminem from releasing a video for “Tone Deaf” in response.

Many of the TikToks in the “My Mom” trend lamented that the sound hadn’t gone viral yet. A week later, it’s been used in more than 99,000 TikToks.