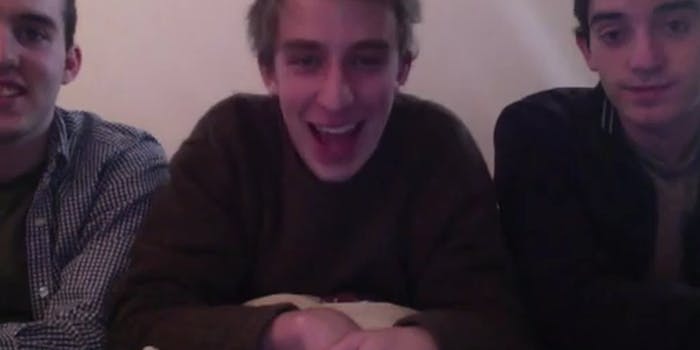 For once, a college fraternity is receiving media attention for doing something non-terrible.

For once, a college fraternity is receiving media attention for doing something non-terrible. The frat in question is the Emerson College chapter of Phi Alpha Tau, where sophomore Donnie Collins pledged earlier this year. Collins is female-to-male transgender, and until recently was having difficulty funding his physical transition. When his fraternity brothers discovered that his health insurance didn’t cover the costs of treatment, they were determined to lend their support.

Collins had been paying for his hormone therapy out of pocket, but could not afford the surgery he required. With a goal of $2,000, his brothers at Phi Alpha Tau set up an Indiegogo campaign, which was quickly picked up by several major LGBT rights sites. With 40 days left until the Indiegogo deadline, the campaign has already raised over six times more than they originally hoped for, leading the brothers to up their goal to the full price of surgery: $8,100.

Since then, Collins himself has posted a video thanking his friends and fraternity brothers—a message from the other side of the It Gets Better campaign, if you will.

As well as being heartwarmingly supportive of their brother, the members of Phi Alpha Tau are using their Indiegogo page as a platform to raise awareness about the difficulties transgender people face when trying to receive medical treatment. As they put it in their introductory video:

“We are here less to raise money, and more to tell a story. The story of transformation, and story of self-discovery, and the story of brotherhood.”

Because many health insurance providers classify hormone therapy and surgeries for transgender people as nonessential treatments, Collins is far from the first person to have to deal with this problem. With the Phi Alpha Tau brothers now discussing what to do with the excess money once the Indiegogo contribution period is over, it seems that their campaign has been more successful than they ever thought possible.