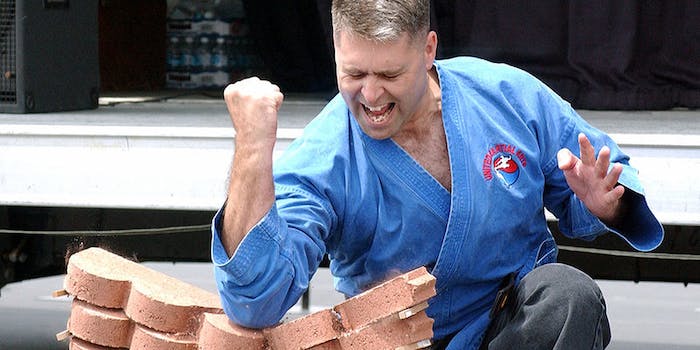 Break or break not. There is no cry.

By now the year has gotten well and truly underway, and you might be having some trouble keeping your New Year’s resolutions.

That’s why, when we stumbled across this epic motivational video from 2010, we decided to offer it up to overachievers everywhere.

As you watch the unknown optimist in this blurry low-res video, ask yourself:

Who are you in the metaphorical road of life?  Are you the board, or are you the breaker?

Or are you the migraine this poor guy had after hitting himself over the head multiple times with giant pieces of wood?

It’s not just that the boards won’t break. It’s not just that as you’re pleading with our unknown hero to just spare himself already, he whips out a second board. No, it’s the sheer unequalled beauty of his profound belief that if he wants it hard enough, the board will succumb to his will. It’s a metaphysical experiment unfolding before our eyes. Is Schroedinger’s board whole or broken? If a board breaks in the forest of good intentions, does it matter? If not now, when?

Too often in life we ask ourselves what our boards can do for us, when what we should be asking is where we can find just one more board.

That’s all we need. Just one more board. Let this be your new mantra. Break or break not. There is no cry.

Do it for the guy who probably concussed himself in the name of will power.