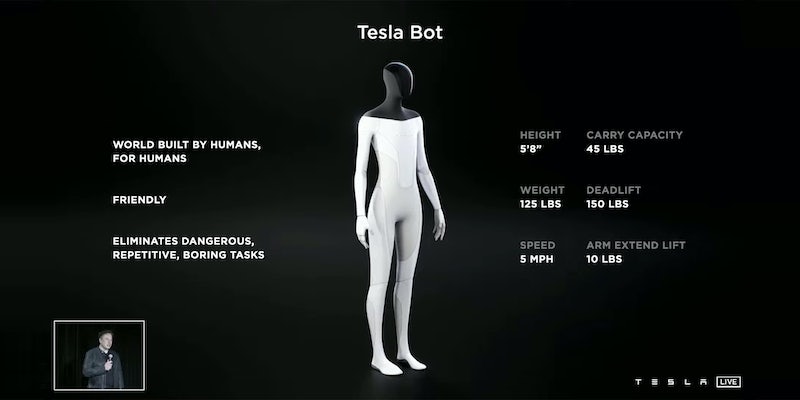 This overhyped humanoid robot is basically just a piece of concept art.

Elon Musk loves nothing more than to publicly promote a product that either doesn’t exist, or doesn’t work. His latest example is the Tesla Bot. Announced on Thursday, this humanoid robot is supposedly designed to perform “boring, repetitious and dangerous” work, fulfilling sci-fi predictions about androids replacing the human workforce. But despite the hype that arrives with any new Musk-related announcement, the Tesla Bot isn’t a viable product.

Musk presented his plans for the Tesla Bot at a tech event named AI Day, saying, “We’ll probably have a prototype next year,” while speculating that the robot might have “profound implications for the economy.” The presentation was accompanied by a performer wearing a skin-tight bodysuit, illustrating what the hypothetical robot will allegedly look like:

On social media, people were quick to crack jokes about the impending robot apocalypse and speculate about the groundbreaking nature of the Tesla Bot technology. As is always the case with Musk’s announcements, his words were accepted at face value by many commentators. But while the Tesla Bot sounds cool, there’s no evidence that this technology will be ready for that prototype date next year.

On Tesla’s Artificial Intelligence page, the Tesla Bot is described in a single paragraph recruiting engineers to work on the project, accompanied by concept art of the robot. Meanwhile, the initial announcement described a humanoid robot in terms that don’t sound plausible for recent technological developments. The images show a smooth humanoid body with a carrying capacity of 45lbs, a speed of 5mph, and a “friendly” demeanor. It will supposedly have “human level hands.” In other words, it should be able to walk, pick things up and perform basic physical tasks like a human, while also looking like a human.

Humanoid robots are a fascinating concept, and various projects are currently approaching the problem from different angles. Some robots like Kengoro attempt to replicate human joints and musculature. Others focus on mimicking social interaction, like the social robot Nadine. And Boston Dynamics is famous for its viral videos depicting humanoid and animalistic robots performing stunts. But none of these robots are as efficient or flexible as a human body, and they’re not commercially viable on a widespread scale.

When we talk about automation replacing human labor, the relevant technology bears little resemblance to something like the Tesla Bot. Supermarket checkout machines replace retail workers. Robo-calls and chatbots replace customer service workers. Some parts of the manufacturing industry have already been automated for decades, like car factories where robotics play a major role. But all of these “robots” are designed to perform specific tasks, whereas Elon Musk’s Tesla Bot (which, once again, doesn’t exist) will supposedly mimic the abilities of a full human body. If Tesla can’t even deliver the Cybertruck on time, then why should people trust in a pie-in-the-sky announcement like this one?