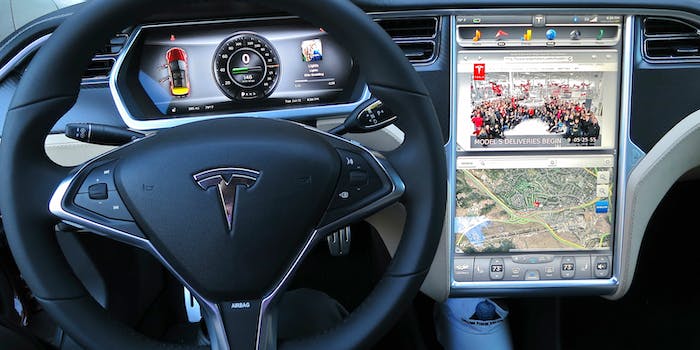 The singer was stuck in a parking lot after her screen went black.

Famed musician Sheryl Crow was pulled out of a jam by Elon Musk this week after experiencing problems with her Tesla.

The songwriter found herself stuck in a parking lot Wednesday and sought advice on Twitter after the screen in her electric vehicle went all black.

Help! Who knows what to do when your @Tesla screen goes black and the reset doesn’t work? Return it and get your money back?? #Tesla #stuckinaparkinglot

Musk, the CEO of Tesla, responded to the issue by informing the Grammy Award-winning artist that she needed to change her “screen preference from night mode to auto.”

“Night mode with 0% brightness is actually too dark during the day. This is ultimately our fault,” Musk tweeted. “We will update our software so that 0% brightness is always usable relative to ambient conditions.”

After speaking with Tesla and fixing the issue, Crow confirmed that the problem had indeed been related to the screen’s brightness. The singer also suggested that Tesla add “some screen controls to the app so that you’re not stuck when the screen goes black.”

“Tesla phone app should have all controls that car center screen has, so your phone can serve as a complete backup,” Musk responded.

Totally agree. Tesla phone app should have all controls that car center screen has, so your phone can serve as a complete backup.

Such interactions are far from abnormal for Musk, who often integrates new features into his electric cars based on advice from customers on Twitter.

Tesla’s “Dog Mode,” which keeps the inside of the vehicle at a suitable temperature when animals are left unattended, was implemented this year after being suggested by a Tesla owner.

Musk’s Twitter activity can also raise eyebrows and land the billionaire in hot water though.

In just the past few months the Tesla CEO has done everything from make sexual comments about the planet Mars to enrage the U.S. Securities and Exchange Commission for his Twitter use.